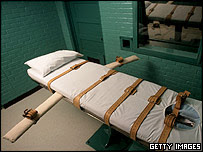 COLUMBUS - A lawsuit challenging Ohio's method of execution has afforded reprieves for some death row inmates and sparked a debate about how the judicial system interprets death sentences.

Six inmates joined a lawsuit this year filed in 2004 by Richard Cooey, 39, who was sentenced to die for raping and killing two University of Akron students in 1986. The suit, which claims that Ohio's method of lethal injection is cruel and unusual punishment, was heard by a federal appeals court Dec. 7, but a decision could take several months.

While judges ponder the suit, apparent contradictions in how different courts determined whether to postpone the executions of two inmates has spurred outcry from death penalty opponents, prosecutors and defense attorneys alike.

The executions of Jeffrey Lundgren, a cult leader convicted in the 1989 shooting deaths of five of his followers, and Jerome Henderson, sentenced to die in the stabbing and beating death of a Cincinnati woman in 1985, were scheduled about six weeks apart.

Each was allowed to join Cooey's lawsuit as their executions drew near.

Lundgren's execution was postponed by a U.S. District judge, but the 6th U.S. Circuit Court of Appeals in Cincinnati overturned that order and Lundgren was executed Oct. 24.

Following the appeals court's lead, a lower court then refused to grant Henderson a stay on his scheduled Dec. 5 execution, but then the same federal appeals court that allowed Lundgren's execution halted Henderson's on the eve it was to take place.

The seeming contradictions by the appeals court reversed two rulings by U.S. District Judge Gregory Frost, who lashed out against the inconsistency.

"Such a lack of clarity is most troubling because when our system of law includes unexplained decision making it loses the legitimacy that must guide the state-sanctioned taking of any human life," Frost wrote in a decision denying a stay for a third inmate in the lawsuit, John Spirko, scheduled to die in April.

On Thursday, Frost made the opposite decision and granted a stay for a fourth inmate in the suit, Kenneth Biros, who was set to die Jan. 23.

"We are just as puzzled as Judge Frost is," said Heather Gosslin, senior deputy for capital crimes at the Ohio attorney general's office.

Of the seven inmates included in the lawsuit, Lundgren and another inmate, John Hicks, received stays but later were executed.

Death penalty opponents cite the differences in the stays and recent problematic executions in Ohio and Florida as reason enough to place a moratorium on executions while the lawsuit progresses.

"Certainly there is enough evidence to question the lethal-injection protocol," said Greg Meyers of the Ohio public defender's office. "So I don't know why no one would want to stop the machinery of death long enough to make sure that we aren't torturing people to death."

Meyers represents Cooey in the lawsuit, which alleges that a painkiller given as the first of three drugs during an execution can wear off before the other drugs run their course, leaving the person paralyzed but in extreme pain.

Lethal injections are used by the federal government and 37 of the 38 states that have the death penalty. Nebraska uses the electric chair.