A man in a white lab coat with a stethoscope hanging out of his pocket passed by behind us and went into the execution chamber. 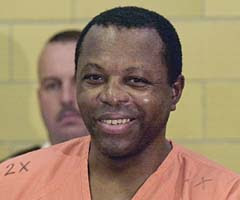 I felt anxious and I knew Amos was feeling the tension.

At one point a man in a white lab coat with a stethoscope hanging out of his pocket passed by behind us and went into the execution chamber.

He actually had a sneer on his face when I caught him glancing at Amos.

The Doctor was Dr. Victor Selyutin, a Russian-born gynecologist who came to this country nine years ago.

Dr. Selyutin has taken part in a number of executions in the past including the murder of Allen Lee “Tiny” Davis the last execution by electric chair in Florida on July 8, 1999.

I shuddered as he entered the execution chamber.
Posted by sisselnor at 11:43

you should have felt the anxiety this monsters' victims felt before they were brutally murdered...

Life in prison with its daily exposure to rape, brutality and confinement is not only truly cruel, but it is also very unusual punishment. The gentle, sterile injection of lethal drugs is the merciful, easy way out.

Funny, back in the late 1980's when I either stapped the inmate into the chair of the gas chamber or pulled the lever that dropped the cyanide into the acid bath the only thing I felt after doing either task was the need for a cold beer and a smoke.The person inside the chamber I could give a DAMN less about.