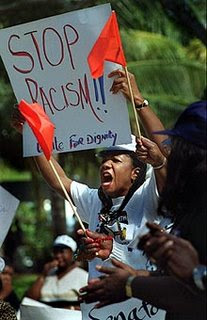 In 1991, a criminal defendant in a capital case was 3.4 times more likely to receive the death penalty if the victim is white that if the victim is African American. Id. 7-8. This statistic has not changed.

A[A]s of December 10, 1999, of the 386 inmates on Florida`s death row, only five were whites condemned for killing blacks. Six were condemned for the serial killings of whites and blacks. And three other whites were sentenced to death for killing Hispanics.

Additionally, since Florida reinstated the death penalty there have been no executions of white defendants for killing African American victims.@ Id. at viii.

The statistics relied on in the ABA Report on Florida make clear that race is a factor in Florida`s death penalty scheme.

Such a factor causes the death penalty to be arbitrary and capricious. Furman, 408 U.S. at 364-66 (Eighth Amendment violated where racial prejudices and/or classism and/or sexism infected sentencing decisions).

Even after Governor Bush commissioned a study of race and its impact on the justice system in 2000, and those involved recommended an additional study, no steps have been taken find a remedy for the injection of a improper factor into the sentencing process. ABA Report on Florida at xi.

The State of Florida`s knowledge of the disparities of race on its death penalty scheme and disregard of the impacts of such a factor demonstrates an impermissible acceptance of a capital system that permits the death penalty to be . . . wantonly and . . . freakishly imposed on a capriciously selected random handful" of individuals. Furman, 408 U.S. at 310.