Prison officials would not allow Selyutin to be interviewed. 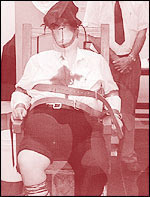 Witnesses to the early morning execution said the blood appeared to have come from his chest underneath the long-sleeved shirt, but Victor Selyutin, the prison doctor who pronounced Davis dead 10 minutes after the execution, said in a prepared statement that ``the blood appeared to be the result of a typical nosebleed.''

Prison officials would not allow Selyutin to be interviewed.
Posted by sisselnor at 09:48