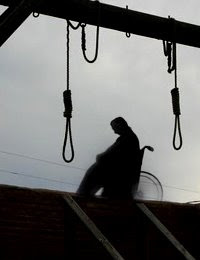 LEXINGTON, Ky. - Kentuckians favor a long prison sentence over the death penalty for prisoners convicted of aggravated murder, a university poll found.
More than two-thirds of those surveyed said the lengthy prison sentence is the "most appropriate" punishment, while less than a third chose the death penalty, the poll said.
The University of Kentucky survey did not ask whether residents support or reject the death penalty but focused on which sentence would be most appropriate.
The poll by UK's Survey Research Center found that 36 percent of respondents said that a life sentence without possibility of parole is the most appropriate punishment; 31 percent favored other sentences that Kentucky juries can impose, including prison terms ranging from 20 years to life imprisonment with parole.
Another 31 percent said execution is the most appropriate punishment. Two percent did not pick any of the available penalties. The poll has a margin of error of 3.3 percentage points.
The death penalty question was part of a larger poll this summer of 836 Kentucky residents.
The question was commissioned by the Kentucky Coalition to Abolish the Death Penalty, which released the results in its most recent newsletter.
"You can't conclude that people are absolutely saying no to the death penalty, but you can conclude that there's something about their answer that suggests they were much more comfortable and satisfied with some penalty other than death," said the Rev. Patrick Delahanty, chairman of the coalition.
The group is planning to promote legislation abolishing capital punishment in the upcoming legislative session.
Rep. Bob Damron, D-Nicholasville, said he doesn't expect the Kentucky General Assembly to change the law. He said even if it's not the preferred sentence, it's important to keep the death penalty available to juries.
"My district has continued to be very supportive of the death penalty," Damron said. "The way the law is right now, it's still left up to the jury to make that decision. I think that's appropriate."
In the late 1990s, polls by The Courier-Journal and the University of Louisville found that about two-thirds of state residents favored the death penalty.
But the UofL survey found that when offered the option, more people preferred sentencing offenders to a long prison term.
The UofL and UK surveys "clearly reveal that the majority of Kentuckians favor a long-term sentence over the death penalty for convicted murderers," UofL justice administration professor Gennaro Vito wrote in an analysis of the UK poll in the coalition's newsletter.
In Kentucky, capital punishment is a sentencing option in cases of murder or kidnapping with aggravating circumstances. Kentucky has had two executions since 1976, when the U.S. Supreme Court reinstated states' rights to impose capital punishment in some circumstances.
Information from: The Courier-Journal, http://www.courier-journal.com
Posted by sisselnor at 08:13