Ethics clash with justice in executions 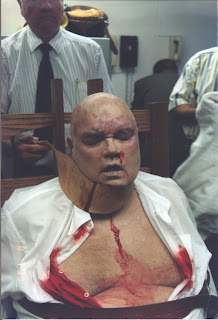 How to trust Florida DOC employees

Ethics clash with justice in executions

STARKE - The execution chamber is so white it looks clinical.

The eggshell walls. The bright ceiling lights. The sheet pulled over the
inmate who is about to die.

The chemicals start to flow. The prisoner goes still. Then a person in
purple medical scrubs and a blue mask - it appears to be a man but there is
no way to tell for sure - emerges from a back room.

The person shines a light in the inmate's eyes and places a stethoscope over
the heart. Eventually, he signals that the inmate is dead.

Florida closely guards the identities of the people involved in executions,
but perhaps none more so than the person in purple.

Medical groups would likely ostracize him if they knew who he was. The
American Medical Association forbids doctors from almost any involvement in
executions because it violates the tenet that doctors will not knowingly
harm a patient.

"If you sent your wife or child to a doctor you wouldn't want them washing
their hands from their last execution," said Dr. William G. Plested III,
president of the American Medical Association. "You might have some
questions about how precious they think life is."

After a botched Florida execution earlier this month in which an inmate took
34 minutes to die, DOC officials revealed that the doctor in purple made
some important decisions after the execution went awry. The doctor made the
call to skip one drug as a second dose of the state's lethal three-drug
cocktail was released into the inmate's body.

DOC Secretary James McDonough said the doctor did this to quicken the death
of Angel Diaz, who was taking so long to die because the needles carrying
the lethal chemicals to his body had broken through the veins in his arms
and into his flesh.

It troubles many doctors and medical groups that a doctor would be calling
any shots during an execution. Still, several state governments and courts
nationwide are trying to draw doctors closer to executions, often to ensure
that procedures are medically sound and that they are carried out humanely.

"It's a role we're not wanting to be in, but it's kind of being thrust upon
us by the legal system," said Dr. David Varlotta, a Tampa anesthesiologist.
"And we have a problem with that."

Varlotta admits there is a bit of a Catch-22.

Doctors may be more likely to ensure that an execution goes smoothly, which
could prevent an inmate from suffering if something goes wrong. But ethics
prevent the doctor from getting involved in the first place.

He asks: How would nervous patients getting ready for anesthesia for surgery
feel if they knew the last procedure their doctor performed was an
execution?

"The people who have the most experience with these kinds of drugs are
anesthesiologists, but ... it's against the Hippocratic Oath," said
Varlotta, who is on the board of directors of the Florida Society of
Anesthesiologists. "I wouldn't want any of my patients to think it was me
under that shroud. I think for us to be cast in that role, it would be
terrible for patients to have to face going into surgery."

DOC officials won't say how they found the doctor in purple, whether he came
to them or vice versa.

"The doctor who did it came to terms with his own ethical code," McDonough
said.

If the doctor's identity was revealed, he would become "highly stigmatized
in the medical community," said Dr. Steven Miles, a bioethics professor at
the University of Minnesota.

Miles said the fact that doctors shield their faces "suggests essentially
the medical ethics argument that physicians should not participate in
executions has been won."

Some bioethicists think states should better train their own execution teams
in the medical procedures needed for executions and leave doctors out of it.

"If the goal is to minimize suffering, then you don't need doctors, you
don't need nurses," said Art Caplan, bioethics professor at the University
of Pennsylvania. "You need trained executioners who practice."

"This is a medical procedure, and we don't have medical people doing it,"
said Martin McClain, who has defended more than 100 death row inmates in
Florida.

In California, defense attorneys have suggested to the courts that doctors
need to be involved in capital punishment to ensure executions are carried
out properly.

The state filed a response saying that scenario would effectively end the
death penalty because no doctors would participate.

Plested, the AMA president, said the future of the death penalty should not
hinge on whether doctors can get involved. He said lethal injection
procedures do not require a doctor.

But defense attorneys believe the Diaz execution shows how badly things can
go wrong. Witnesses saw Diaz wince, grimace and cough, though members of the
execution team reported no signs that Diaz suffered during the 34 minutes it
took him to die.

A preliminary autopsy found two foot-long burn marks on his arms where
chemicals drained from his veins into his flesh. The doctor who performed
the autopsy has held off on saying if Diaz felt pain until more tests are
complete.

But doctors interviewed by the St. Petersburg Times said these chemicals
likely would cause severe pain, which would violate the Eighth Amendment ban
on cruel and unusual punishment.

Gov. Jeb Bush halted executions while a commission reviews the state's
lethal injection procedures. A preliminary report is due from that group in
two months. Caplan said history also has taught us - in Nazi Germany, China
and Turkey - that doctors should not be used by the state to harm people.

"If the state wants to execute people then ... it should not have doctors
using medicine in that role," he said. "Medicine is not to be used as the
punishment arm of the government."