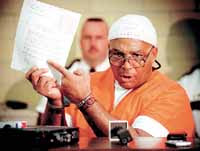 State Attorney Rod Smith said Thursday that his office will not investigate the surgical procedure performed on a convicted killer minutes before he was put to death Wednesday evening at Florida State Prison near Starke.

Inmate Bennie Demps' attorney, George Schaefer, asked for the investigation Wednesday after the inmate's desperate plea as he prepared to receive a lethal injection just before 7 p.m.

Minutes before his execution, Demps said technicians had cut him in the groin and leg and that he was "bleeding profusely."

"I was in a lot of pain," he said to the 32 witnesses at Florida State Prison.

But Smith denied the request and said the execution was "carried out as mandated by the governor."

Smith said an observer from the State Attorney's Office saw "a large bore needle mark in the right groin and a small incision inside the right ankle" during an external exam of Demps' body Thursday. The observer also reported two additional puncture wounds in the right arm. The left arm still showed where a sodium chloride intravenous line had been inserted.

Demps, 49, was put to death after workers had a difficult time finding a sufficient vein on his body for a second IV line.

"The fact that it took a little while longer doesn't mean there was anything out of the ordinary," he said. "We need to do whatever we have to do to locate the primary and secondary veins. Protocol allows us to do it."

Drake said the second vein technicians had trouble locating -- and resorted to a surgical procedure to reach -- was an alternate and was not used during the execution.

Doug Wallace, nursing coordinator of Shands at the University of Florida, said when Demps said he'd been cut in the groin, he was probably referring to a "femoral stick." Wallace called the procedure, where doctors cut into the skin by incision to find a vein in the groin area, "normal to hospitals and very common" when doctors are unable to find a suitable vein for an IV.

"It's something that's very simple and that we deal with all the time," he said.

The execution, scheduled for 6 p.m., also was delayed while the prison waited for paperwork rejecting a final appeal from the U.S. Supreme Court, which arrived at 5:30 p.m. Wednesday.

Demps, a Muslim, had asked not to have an invasive autopsy for religious reasons. The Alachua County Medical Examiner's office, which received Demps' body after the execution, performed an external exam Thursday, in accordance with Demps' request.

Medical Examiner William Hamilton said the cause of death was from injection of lethal toxins.

Medical examiner's officials said toxicology results will be completed in eight to 10 weeks.

Complaints about the surgical procedure may be used in the death appeals of Thomas Provenzano, the next man scheduled to die by lethal injection, an appeals attorney said Thursday.

Michael Reiter, an attorney for Provenzano, who is scheduled to die June 20, said Demps' complaints call into question the ability of the DOC to carry out a constitutional execution.

The U.S. Supreme Court considered the question after Allen Lee ''Tiny'' Davis was executed in July, Reiter said. Davis' bloody execution and a promised review by the high court on the constitutionality of Florida's use of the electric chair sparked the Legislature to change the state's method of execution to a choice between lethal injection or electrocution.

''When Davis was executed, it spurred an action before the United States Supreme Court on the DOC's ineffectiveness in knowing or being trained on what to do,'' Reiter said. ''Obviously, it has raised its ugly head again.''

Demps was executed for the stabbing death of Alfred Sturgis, who was attacked in his cell by three inmates in 1976.

Demps was first on Death Row for the 1971 murders of R.N. Brinkworth and Celia Puhlick, who Demps fatally shot in a Lake County citrus grove. They were inspecting land when Demps happened upon them with a stolen safe.

One year after Demps was sent to Death Row, the Supreme Court declared capital punishment unconstitutional. Demps was one of 97 inmates in Florida taken off Death Row.

In July 1976, Florida's death law was upheld. Two months later, on Sept. 6, 1976, Sturgis was stabbed to death at the state prison in Starke. Demps was sentenced to death.

George Hutchens can be reached at 374-5095 or hutcheg@gvillesun.com.

The Associated Press contributed to this report.