The Hanging of Saddam Hussein 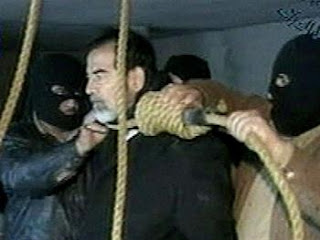 The Hanging of Saddam Hussein

As we lick our chops, collectively salivating as Hussein is led to the gallows, American bloodlust ranks up there with a diminishing number of countries in Asia and Africa that impose capital punishment, yet we are unremarkably unparalleled in the Developed, Western, Industrialized world.

By the time this reaches print, Saddam Hussein will be dead. And I have no doubts that if his public hanging had been offered for American viewing, stations would have scrambled to air the execution. Under the pretext of being "newsworthy," and therefore, worth witnessing, the event would have covered our home screens with death images not unlike those once viewed publicly in the Gladiator-like arenas.

But surely, watching a "live death" would be far more civilized from the privacy and comfort of our own home theaters. However, the American penchant for "reality based television" and violence is the perfect coupling for record-breaking ratings during a televised execution.

The very anticipation of a noose around Saddam Hussein's neck has been getting good airtime, but not the non-stop coverage that television executives would hope for due to the obligatory coverage of one of the many Gerald Ford funerals.

This is not to make light of Hussein's crimes against humanity. That is a given. Rather, this is a look at a diminishing number of countries that still impose capital punishment - and the irony of whose company we keep.

According to Wikipedia and Amnesty International, there are approximately 70 countries that "retain the death penalty in both law and practice." Note that this distinguishes said countries from others that have the death penalty by law, or on the books, but no longer practice or enforce capital punishment.

The following breakdown is only a partial list of countries that either support or do not suppport the death penalty.

Of the nations described as Western, Developed or Industrialized, very few impose capital punishment. Nearly all of the European continent opposes the death penalty with the exception of Belarus. Latvia has the death penalty by law, but only imposes such sentences on "exceptional crimes." Turkey and Russia, too, list it by law, but it is not used in practice.

Canada does not impose capital punishment nor does Mexico. Japan is one of the few industrialized nations that continues to impose such a penalty.

Most interestingly, is the following "short list" of countries in relation to the United States and much of our continued rhetoric regarding nations that we have described as barbaric or part of the "Axis of Evil."

Along with the United States in supporting and imposing capital punishment are: Iraq, Iran and North Korea - the latter three all "Axis of Evil" designees. And for good measure, Syria is keeping company with us as well.

A few of the other Middle Eastern, Asian or African countries that impose the death penalty include: Afghanistan, China, Indonesia, Jordan, Malaysia, Pakistan, Saudi Arabia, Somalia, Uzbekistan and Yemen.

I do not make judgments on any of the above countries, but rather, am pointing out what I see as the blatant hypocrisy of the United States in our loose canon of condemnations, insults, judgments and deadly labels that we have placed on many nations whose company we keep on the list of those who "violate human rights" - a quote and description often used by international Human Rights agencies and watchdogs.

A native Californian, Jan Baumgartner is a freelance writer currently living in Maine. Her background includes scriptwriting for video and film production companies, comedy writing for the Northern California Emmy Awards, and travel writing for The New York Times. She has worked as a grant writer for the non-profit sector in the fields of academia, AIDS, and wildlife conservation and research in the U.S. and Kenya. Her articles and essays have appeared in numerous online and print publications. Her travels in Africa are the inspiration for much of her work. She's finishing a memoir about her husband's death from ALS.

View Other Articles by Author