Lawyers for former Illinois Gov. George Ryan are pleading with a federal judge to free him, arguing his wife's terminal illness -- as well as a recent U.S. Supreme Court decision -- should factor into his release.

Earlier this year, the U.S. Supreme Court struck down an honest services law -- which involved some of the charges that faced Ryan. Ryan's lawyers say he has served 34 months of his 78-month sentence and, given the Supreme Court decision, that should be enough.

"George Ryan is now in prison serving time for something that the United States Supreme Court has said is not a crime," Ryan's lawyer, Dan Webb, said after court.

U.S. District Judge Rebecca Pallmeyer set a Nov. 1 hearing to weigh whether Ryan should be freed and parts of his conviction overturned because of the decision.

Webb pointed to Ryan's wife, Lura Lynn, who was in court Thursday carrying an oxygen tank that was hooked up to her nose.

Assistant U.S. Attorney Laurie Barsella said that prosecutors "strongly and vociferously disagree'' that the Supreme Court decision had a bearing on the Ryan case.

"In our view, this case was all about bribery and kickbacks,'' the exception to the honest services law that was upheld by the high court, Barsella said.

In a filing last week, Ryan's lawyers urged Pallmeyer to release Ryan as lawyers fight over the law, saying there was urgency because of his wife's illness.

The filing cited 10 medical conditions Lura Lynn Ryan suffers from, primarily pulmonary fibrosis. It also said she suffered a mini-stroke while visiting her husband in prison.

"The stress of being away from her husband exacerbates both her physical condition and her depression," they wrote in the filing.

Ryan is 76 and suffers from Crohn's disease, hypertension and heart disease, his lawyers say.

"It's fair to say that George Ryan has a lot of health issues also. He's a very strong man," Webb said. "We told him to hang in there. He's a strong-willed man."

Ryan's son, George Ryan Jr., teared up when Webb described his mother's condition outside the courtroom.

"I miss him a great deal,'' Lura Lynn Ryan told reporters, herself blinking back tears.

Without intervention, George Ryan is scheduled to be released in 2013.

The Ryans have renewed a clemency request with President Obama, who has not acted on it.

A Contributor Perspective: Welcome to Illinois Where Corruption is in Abundance! 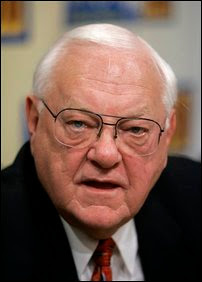 Former Governor George Ryan filed a motion in court late Tuesday to have part of his conviction dismissed. He is citing the Supreme Court ruling regarding Enron's Jeffrey Skilling's case.

According to Ryan's attorneys, under the new ruling, Ryan's conviction is unlawful. George Ryan was convicted in 2006 of racketeering, conspiracy, tax fraud, and making false statements to the FBI (sound at all familiar?). Not all of these convictions pertain to the honest services laws, so some of the convictions will stay even if he wins this battle. Currently Ryan is serving a 6 and a half year federal prison term in Terre Haute, Indiana.

If Ryan's attorneys are as good as they think they are, he can very well have these convictions overturned. This makes me very angry because after all the effort and money the state put into that 6 month trial in 2006, it seems like a waste. Being that Ryan is getting up there in age (he is currently 76), I almost feel as though the courts will take pity on him. Doesn't seem quite fair does it? If his convictions are indeed thrown out, it is also possible that he will be released from prison to return to the life he once had. I can't help but wonder, will this be yet another slap in the face for Illinois? After last month's trial of Blagojevich, the jury came out hung on 23 of the 24 counts. Can this get any worse?

This new honest services ruling seems to be a bunch of baloney. Just who exactly gave George Ryan honest services? The men/women who showered him with gifts and donations to his campaign? I can't see how that is very honest at all. With this ruling, I expect a lot of politicians in both the United States and Illinois to try and get away with as much as possible and not be able to be prosecuted. This ruling of the Supreme Court can only be deemed as ridiculous in my mind. I am going to sit back and watch this all unfold. My guess is, it won't be pretty and that Ryan's convictions will be thrown out.

The situation for Illinois is only getting worse with these corrupt politicians. George Ryan filing that motion was just one of the many setbacks I can see coming. Hopefully, his convictions will
stick, though I realize it is highly unlikely at this point.

A frail Lura Lynn Ryan attended a federal court hearing Thursday carrying an oxygen canister in a tote bag and with tubes running from it to her nose.

Attorney Dan Webb cited her illness in arguing there's urgency to the request to release the ex-governor while the judge considers a motion to throw out parts of George Ryan's 2006 conviction.

Webb says Ryan's wife has a lung disease and only has "one or two years to live."

The 76-year-old former Republican governor is due for release in 2013. He wants Judge Rebecca Pallmeyer to dismiss convictions based on disputed anti-fraud laws.