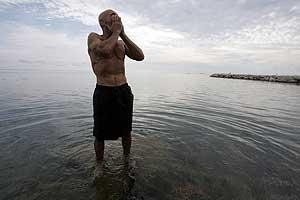 The first time Orlando Boquete walked into P. Morgan Hill's kitchen last summer, she handed him a cup of coffee. He cradled the ceramic mug in his hands, feeling the warmth against his palms. Tears welled up in his eyes.
Posted on Tue, Dec. 26, 2006

MARATHON - The first time Orlando Boquete walked into P. Morgan Hill's kitchen last summer, she handed him a cup of coffee. He cradled the ceramic mug in his hands, feeling the warmth against his palms. Tears welled up in his eyes.

''A real cup,'' he said. In prison, dinnerware had been plastic. He hadn't held a mug in years. That August morning -- his first full day of freedom after DNA evidence cleared him of a 1983 sexual assault conviction -- was a morning of firsts.

He swam in the ocean off Sombrero Beach. He caught a sand grunt after borrowing a fishing line from a man on the shore. He did his first radio interview and talked about his legal odyssey: a wrongful conviction, 12 years in prison, two escapes, 10 years as a fugitive and three months spent at the Krome detention center as lawyers fought a deportation order.

In some ways, Boquete is like many of the other 187 exonerated prisoners across the country. He's catching up on so many lost years. He missed watching his family grow up. And even the simplest pleasures, like sipping coffee in a real cup, were taken from him.

But he's also different. He doesn't have the haunted eyes and expression that many exonerees wear for months -- and sometimes years -- as they struggle to make peace with injustice and reconnect with society. And he's not bitter.

''I'm enjoying my life now,'' he told The Miami Herald in an interview in early December as he prepared to celebrate his first Christmas outside of prison in 11 years. ``Everything makes me happy, even driving my bike.''

In the four months since his release from Krome, Boquete has found a new life and settled into a community in the Keys. The city of Marathon has embraced him, easing his reentry into society.

Home is a comfy two-room bungalow in Marathon, where he's living rent-free courtesy of Hill, a well-off real estate entrepreneur and her business partner Paula Nardone. The women own three Exit Realty offices in the Keys. They pay him $10-an-hour to do landscaping on their properties.

''God blessed me and he brings love into my life through all these people who have helped me,'' Boquete said ``I had a lot of bad luck in the past. But now I have nothing but good luck.''

He still juggles two lives -- his past and present.

Each week, he takes a three-hour bus ride to Immigration and Customs Enforcement offices in Miami to check in with immigration authorities. It's part of a supervised release program negotiated by his lawyers to defer action on a deportation order and free him from Krome. Because he's Cuban, it's unlikely under current law that Boquete would actually be deported, but the order could keep him from becoming a U.S. citizen.

But he also meets with movie producers who are interested in the rights to his life story and a reporter from The New York Times who is writing a piece for the paper's Sunday magazine chronicling Boquete's daring escape from prison and his life on the run.

``I tell those movie producers that that guy in The Fugitive has nothing on me because my story is real. You know, if they ever make a movie, I think Johnny Depp should play me. He looks like me when I was younger, really. Don't you think?''

It's all a little overwhelming for the former ship engine mechanic who arrived in Miami at age 26 during the Mariel boatlift.

Two years later, police charged him with the sexual assault of a Stock Island woman after she pointed him out on the street as the man who had just attacked her in her bed. In 1983, a jury convicted him based on the victim's ID. He escaped two years later and ran for a decade before he was caught and sent back to prison. In 2003, he saw a television show about the Innocence Project and asked the organization for help.

He knew he'd get out one day, but said he never expected all the interest in his story. He says he can be shy sometimes, but he does enjoy the attention being paid to his prison break. The usually humble Boquete has a bit of a swagger about his resourcefulness in busting out, an adventure that included a dangerous encounter with an alligator in a canal and a long trek through swamp lands. He never really felt free, but at least he wasn't in prison, and he's proud he was able to stay out for so long.

He ended up working for Hill after she heard his radio interview in August. She called his attorney Hal Schuhmacher, an old friend.

''Is there anything we can do to help him?'' asked Hill. When she heard Boquete was starting his new life living in a cramped public housing apartment with his brother and sister-in-law, his niece, her husband and their three children, she offered him the empty bungalow.

Boquete's reaction to the ceramic mug the first time she met him instantly melted through her feisty wise-cracking tough-talking outer layer.

''I was amazed that he wasn't bitter. He just wanted to work and fish,'' she said. The two have become fast friends.

Following Hill and Nardone's lead, many in Marathon rallied around Boquete. He walked out of Krome only with the clothes on his back, an extra pair of shoes and a Bible. He didn't even have identification -- during his first few days of freedom he carried around a newspaper with his photograph on the front page so he could explain to people who he was.

The staff in their three real estate offices pitched in, donating two pick up trucks of pots, pans, dishes, linens and lace curtains to help furnish his place. A local merchant donated a bed. An optometrist made him a set of stylish and expensive rimless glasses for cost. Others bought him clothes.

''People here have taken to him,'' said Schuhmacher, the local attorney who worked with the New York-based Innocence Project to free Boquete. ``He's sort of become a semi-celebrity.''

It's a warm December afternoon and Boquete is planting shrubs at Hill and Nardone's one-acre waterfront estate. He relishes working outside, with the Atlantic Ocean as his companion. The view, however, is a constant reminder of the one thing about his freedom that upsets him. He's not allowed to ride in a boat.

Even though the sexual assault conviction was cleared, he pleaded guilty in Miami-Dade to burglary and dealing in stolen property under an alias while he was on the run. He served six months in a Miami-Dade jail for the third-degree felonies.

Those convictions triggered deportation proceedings after he was freed from prison in May. His lawyers struck a deal with federal officials to get him released from Krome and defer the deportation hearing. But he had to agree to a number of conditions, including not leaving Florida and not getting on a boat.

''It hurts me,'' he said. ``I appreciate ICE deferring deportation orders. But I wish they would let me get on a boat.''

There are no restrictions on riding his bike, his main mode of transportation.

In prison, Boquete said, he would have a recurring nightmare. He was in Cuba, running barefoot through the countryside.

'All these people kept passing me by on their bicycles. I couldn't keep up with them. And in the dream I would think `I should have brought a bicycle.' Now, I'm so happy to finally have my bike.''

The 52-year-old is wearing cargo pants that fit loosely around his 28-inch waist and a tank top T-shirt that shows off his well-defined upper arms as he rakes pebbles to fill in between the plants.

He says he really saw his face for the first time in more than a decade in May, at the Marathon courthouse the day a judge overturned his sexual assault conviction.

''In prison, you only have those little steel mirrors, so I never got a good look,'' he said. His reflection in a courthouse bathroom mirror stunned him.

'I was standing there talking to myself in that mirror: ``Oh my God, look at me.' But that's OK.''

After work Boquete makes a quick stop at his bungalow to clean up. A string of Christmas lights hangs from the awning. He put them up before Thanksgiving.

'Ms. Morgan, she said to me `Orlando, it's too early for Christmas lights.' Not for me. It's not too early.''

He showers and then it's off to his niece Danay Rodriguez's house.

She's been his champion for years, the one in the family who regularly wrote to him in prison. She formed her bond with him while he was on the run and would visit.

Her three children rush to the door to greet him. ''Tio, Tio,'' they yell. Allan, the 2-year-old, wraps his arms around Boquete's leg.

''That makes me feel good that an innocent child love me so much,'' he said.

They banter about Christmas gifts and how they'll spend the holiday.

''You should have seen him at Thanksgiving. He danced like a crazy man with his friend he brought,'' Rodriguez said.

''Uh, for him to get a girlfriend, I have to approve,'' Rodriguez said.

``I don't need girlfriends right now. I need lady friends. And family and all the wonderful people who are helping me get to my dreams.''