New reason for doubt on the death penalty 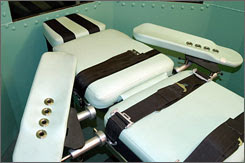 New reason for doubt on the death penalty

Three decades after the U.S. Supreme Court laid out constitutionally permissible ground rules for executions, states keep discovering flaws in their grim procedures and sometimes in the rules themselves.

Florida and California are the most recent states to put the brakes on capital punishment.

Gov. Jeb Bush suspended executions after it took 34 minutes and two injections to kill the murderer of a Miami topless bar manager. The needles used in the execution apparently passed through Angel Nieves Diaz's veins, depositing the chemicals in his flesh.

Just days later, a federal judge extended a moratorium on California executions after hearing unsettling testimony about its injection procedures. Considering whether the drugs cause sufficient pain to violate the constitutional ban on cruel and unusual punishment, U.S. District Judge Jeremy Fogel said he was "compelled to answer that question in the affirmative."

Once viewed as safer and more benign than electrocution, evidence is mounting that lethal injection can cause an excruciating death. While Judge Fogel says he believes California's problems can be fixed, three decades of ongoing controversy over one form of death or another poses a question: Is the idea of a humane execution an oxymoron?

Perhaps Americans should dispense altogether with the notion that killing, whether by an individual or the state, can be sanitized into acceptability. No one has yet devised, it seems, a fail safe, pain-free way of snuffing out human life.

As Americans learn more and more about distant corners of the world, we gain a sharper view of societies in which the instinct for vengeance exists unrestrained. Perhaps we can glimpse more clearly also the higher good in striving for a different way.

A dozen years ago, former U.S. Supreme Court Justice Harry Blackmun threw up his hands in disgust over endless efforts to perfect what he had finally concluded was imperfectable. "The death penalty experiment has failed. I shall no longer tinker with the machinery of death," he said.

So far, Americans have refused to give up on an eye for an eye.

We keep tinkering, in large measure, because the result simply cannot be reconciled with our highest ideals.