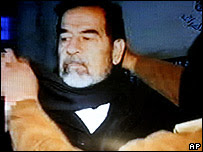 Ousted Iraqi President Saddam Hussein's death by hanging has fueled opponents of the death penalty in the United States, which is at odds with many of its closest allies who view the practice as barbaric.

U.S. airwaves were blanketed with images of black-masked hangmen leading Saddam to the noose on Saturday in what U.S. President George Bush called "an important milestone on Iraq's course to becoming a democracy."

Richard Dicker, director of an international justice program of New York-based Human Rights Watch, said: "The execution of Saddam, a human-rights monster, turned his unspeakable record upside down." Saddam, 69, was convicted in November by a U.S.-sponsored Iraqi court of crimes against humanity and was hanged at dawn in Baghdad. Deposed by a 2003 U.S.-led invasion, Saddam refused a hood designed to shield his gaze as he faced the gallows.

Images of the execution "will not strengthen the argument of death penalty proponents in the United States or anywhere else," Dicker said.

David Elliot of the National Coalition to Abolish the Death Penalty, a Washington-based group working to end capital punishment, called the pictures "ghoulish." "We're more determined than ever to abolish the death penalty," he added in a telephone interview. "It's not a question of whether it will happen, it's a question of when."

The American Friends Service Committee, a Quaker group, urged the U.S. government to join global moves to end the death penalty. Executing Saddam fails to remedy a grave human-rights situation in Iraq and "serves only to devalue further the right to life," said Tonya McClary of the group's anti-death penalty program.

Most Americans still favor the death penalty, but many U.S. states are reconsidering it. U.S. executions are at a 10-year low, and the annual number of death sentences has dropped almost 60 percent since 1999, according to the Death Penalty Information Center.

"Many allies consider such practices to be unfit for a great democracy seeking to assert leadership on human rights and other international policy matters," the American Civil Liberties Union said in a paper that concluded the death penalty weakened U.S. interests worldwide.

Former Belgian foreign minister Louis Michel reacted to Saddam's execution by saying "you don't fight barbarism with acts that I deem barbaric." Legal challenges in the United States often turn on whether executions violate a constitutional ban on cruel and unusual punishment.

Saddam's execution will boost opposition to capital punishment worldwide, including the United States and the Middle East, "because it will be viewed as following a flawed, rushed trial that resulted in a penalty that is cruel and inhumane," said Zahir Janmohamed of Amnesty International, winner of the 1978 Nobel Peace Prize.

More than half the world's countries -- 129 -- have abolished the death penalty in law or in practice, according to Amnesty. China, Iran, Saudi Arabia and the United States accounted for 94 percent of the executions recorded by Amnesty International in 2005.

Of the known total, China had the lion's share with at least 1,770 while 60 were executed in the United States, Amnesty said. Seventy-two percent of the 50 U.S. states had no executions in 2006, according to the Death Penalty Information Center.

Most executions in 10 states are on hold as aspects of their capital-punishment laws are examined. Two states -- Illinois and New Jersey -- have a formal moratorium on all executions while their legislatures weigh the issues. In the United States, two states -- New Hampshire and Washington -- authorize executions by hanging, with lethal injection as an alternative.
Posted by sisselnor at 15:08