What better way to demonstrate that it's wrong to kill people than by killing someone? 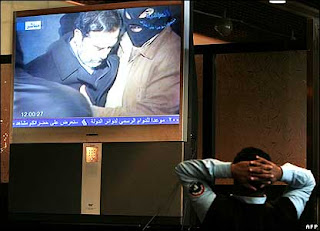 What better way to demonstrate that it's wrong to kill people than by killing someone? Saddam Hussein is reportedly going to be executed by Sunday.

And what better way to do it than a barbaric hanging? This is 2006, who needs humane methods? Humanity, civilization, the Fifth Commandment– who needs any of those things? It's not like any of the people involved on either side are religious and would feel compelled to follow their God's rules.

Call me a bleeding heart liberal, but I'm still against the death penalty, even for Saddam Hussein. I just don't see how this is a tougher punishment than life in prison. He is getting off scot-free! What better way to create a martyr out of him, which will infuriate the Baathists even more, refuel the insurgency, and stir up some badly needed support from the American public for this illegal war. It's a win-win situation for Mr. Bush. They're very good at playing dumb, but there's a reason for everything this Administration does.

"He told them [his brothers] he was happy he would meet his death at the hands of his enemies and be a martyr, not just languish in jail."

- Badie Aref, one of Saddam's lawyers

If this is all about war crimes, why isn't Mr. Bush and his entire Administration being tried? The U.S. invasion and occupation of Iraq has resulted in the deaths of anywhere from 100,000-655,000 civilians. THAT is a war crime. Talk about hypocrisy.

Lastly, one cannot ignore the speed of this execution. While the people involved are night and day different in their actions, it's reminding me all too much of Sophie Scholl and her expedited execution at the hands of the Nazis. Would this happen with an American official? I certainly don't think so. But then, we are exempt from most international rules because we're AMERICA damn it!

Just another soldier in the good fight.

View Other Articles by Author