Court To Determine If Disabled Standard Should Apply In 1992 Case

WASHINGTON - The U.S. Supreme Court will hear arguments on Monday in a 1992 murder case from Hamilton County.

Ohio Attorney General Richard Cordray is asking the court to reverse a lower court decision that set aside the death sentence imposed on Michael Bies for his murder of a 10 year-old Cincinnati boy.

Bies and an accomplice lured Aaron Raines into an abandoned building and bludgeoned him to death. A Hamilton County jury convicted Bies of aggravated murder, attempted rape and kidnapping, and further recommended a sentence of death. The Ohio Supreme Court had affirmed the conviction and death sentence in 1996.

In a 2002 case, Atkins v. Virginia, the U.S. Supreme Court held that the Constitution prohibits the execution of mentally retarded defendants. The U.S. Court of Appeals for the Sixth Circuit later ordered that Bies' death sentence be set aside because the Ohio Supreme Court briefly mentioned the mental retardation issue in one of its earlier opinions.

Cordray said he maintains that the Ohio Supreme Court never determined that Bies is mentally retarded under the Atkins standards.

If Cordray prevails, the court will return the case to the Hamilton County courts, which will conduct a hearing, take evidence and issue a finding on Bies' mental capacity.

"Developmentally disabled individuals cannot be executed, period," said Cordray in an news release. "However, it is important that the proper procedures be followed to make that determination for any death row inmate. We believe the federal courts should have allowed the Ohio state courts to determine this issue anew after Atkins was decided and resulted in a major change in the law. Should we prevail, I have every confidence that Mr. Bies will receive a full and fair hearing in the Ohio courts."
Posted by carie at 19:33 No comments:

OTTAWA -- The Harper government said Thursday it was ‘deeply disappointed' by news a Saudi court had upheld the death by beheading sentence of a Canadian man who was convicted in the 2007 death of another man.

"We are deeply disappointed at the reports that a Saudi court has upheld its decision to sentence Mohamed Kohail to death," said Deepak Obhrai, parliamentary secretary to Foreign Affairs Minister Lawrence Cannon. "Canada continues to express its concern for a fair and transparent review of the wording and the sentence."

The decision by the Jidda General Court sends the matter back to the Saudi Supreme Judicial Council -- essentially an appeal court -- for a final ruling.

Mr. Obhrai told the House of Commons that Cannon has requested that Canadian officials review the final court decision when it is issued.

Aubrey Harris, who works on a campaign to abolish the death penalty for Amnesty International, said there could still be a positive outcome for Kohail in the Supreme Judicial Council.

"The lower court is refusing to change its decision," he said, "but what it means is (Kohail's) case must now go back before the . . . council, which had originally felt that his case should be overturned. So it is a matter of waiting and seeing."

Mr. Harris said it's unclear if the delay will allow for more evidence to be presented in court.

There was no word on developments regarding Kohail's younger brother, Sultan, who was charged in the same incident.

Sultan was originally tried in Saudi youth court and sentenced to 200 lashes -- but now faces trial in adult court, where he could also face a death sentence.

Liberal MP Dan McTeague, the party's consular affairs critic, argues there's evidence to suggest Kohail's case was one of self-defence and he does not deserve a death sentence, which would be carried out by sword.

Kohail, a 23-year-old Montrealer, was living temporarily in Jidda, Saudi Arabia, when he got involved in a schoolyard brawl in January 2007. The fight resulted in the death of an 18-year-old man.

The Kohail family maintains evidence -- not permitted to be entered at the separate trials of their two sons -- suggests the two were trying to escape from a mob and did not cause the injuries that led to the Syrian man's death.

"It hasn't been a fair run," Mr. Harris said. "The court system is undergoing modifications and a number of them haven't taken effect yet, but [the council] may have the power to overturn lower court rulings."

Mr. Harris said the court's final decision will likely be made "in a few weeks," and he hoped the Canadian government would push for Kohail's release.

"The Canadian government must intervene," he said.

Mr. McTeague also has concerns about how the court decision was made without any public written documentation.

"This, in itself, is significant because it was done, in my view, in a very perfunctory way . . . and said, ‘ya, too bad, we're sticking with the decision.'"

The Kohails settled in Montreal after emigrating to Canada in 2000 and became Canadian citizens in 2005.

With files from the Montreal Gazette
Posted by carie at 16:12 No comments:

Steve Goble's It's Debatable: Nothing sensible about the death penalty

I can solve the problem in four words: Dump the death penalty.

The long appellate process sometimes defeats the possibility of justice being served, Cordray said last week. Long waits make it difficult when, after a dozen years in the courts, a retrial involving a new prosecutor and new police officials is required, he said.

"If it does lead to a retrial, it's very difficult to feel that fair justice can be achieved on a redo because so much changes over time, particularly in presenting factual evidence to juries," he said.

It is interesting Cordray mentioned things that change over time. One thing that often changes is the quality of forensic evidence. Better science and investigative techniques come along, and sometimes show the wrong people are on death row.

That, to me, is reason enough to dump the death penalty. If Cordray thinks redoing a trial is difficult, he should try redoing an execution.

On a gut level, I think some crimes merit death. Some evils make me lose all sympathy for the perpetrators.

The problem, of course, is making certain we get the right perpetrators. Too often, we don't.

The American Civil Liberties Union reports that since 1973, 123 people nationwide have been released from death row because they were innocent. Seven others were executed even though they probably were innocent. A study reported in the Stanford Law Review documents 350 capital convictions in which it was later proven the convict had not committed the crime. Of those, 25 people were executed. Fifty-five of the 350 cases took place in the 1970s, and another 20 between 1980 and 1985.

In many instances, DNA evidence is what sets innocent men free. Such evidence is relatively new -- it wasn't available when many people were wrongly convicted. A lengthy appeals process saved their lives, by keeping them alive until forensic evidence could prove their innocence.

The idea that innocent people might be run over while society seeks justice is appalling. When the issue is whether to take someone's life, "correct most of the time" is a worthless standard.

Today, about 3,350 people are on death row nationwide, the ACLU reports. Almost all are poor, many are mentally disabled, more than 40 percent are black and a disproportionate number are American Indian, Latino or Asian.

Ohio has 175 inmates on death row, Cordray's office reported last week. About half are black.

Some of these condemned may be innocent. How many are we willing to sacrifice?

Think about most of those who commit crimes that could land them on death row. They're not our best and brightest. They often have limited ability to think beyond the next five minutes. They are in a rage, or hopped up on drugs, or desperate for their next fix. The last thing they are likely to consider is the consequences of their actions.

One more data point: A Death Penalty Information Center analysis of statistics from 2001 to 2007 shows Southern states, which execute far more inmates than the rest of the U.S. combined, have consistently had the highest per capita murder rates.

Cordray has said the appeals process properly results in second looks at some cases. Good for him. The next step is for him to realize that such instances are reason enough to flush the death penalty. He should use his office to promote such change.

According to Cordray's report, there are 21 inmates on Ohio's death row whose appeals are all but exhausted. Are any of them innocent? Maybe not, but I wonder. Is it worth the risk of executing them? No.

Evidence shows we have an imperfect judicial system, run by fallible human beings. Our courts get a lot of things right, and they have a lot of built-in protections to help assure they do. Still, mistakes are made. The merciful, sensible, moral thing to do is to not put convicts to death in the first place. We should work toward that.

In the meantime, let's not start erasing vital protections just to save time and fuss.

We're talking about human life here. It's worth the time and fuss.

Steve Goble is a copy editor and page designer for the News Journal. Look for his column, "It's Debatable," in the Community Conversation section every Sunday, and visit his blog on our Web site. E-mail him at sgoble@nncogannett.com.

What if They Gave an Execution and No One Came?

The state of Washington now finds itself without an executioner, following the abrupt resignation of its lethal injection team. The four volunteers who administer lethal injections to death-row inmates at the Washington State Penitentiary in Walla Walla quit their positions because of fears their identities might become revealed as a result of a judicial ruling. A state judge, Chris Wickham, wanted to review the four individuals’ credentials, qualifications and experience in administering lethal drugs as part of a lawsuit filed by death-row inmates over the constitutionality of the execution procedure. The judge would not have revealed any information that would have personally identified the team members, but apparently the individuals were still worried about having their records held under seal at the state attorney general’s office.

Currently, there are no executions scheduled in Washington, which gives officials time to assemble a new team. The state Department of Corrections has been in touch with officials in other states in case Washington has to “borrow” a lethal-injection team. Washington has not had an execution since August 2001.
-Noel Brinkerhoff
Posted by carie at 14:33 No comments: 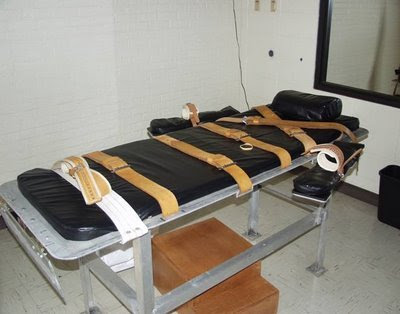 From the Blog Standdown :