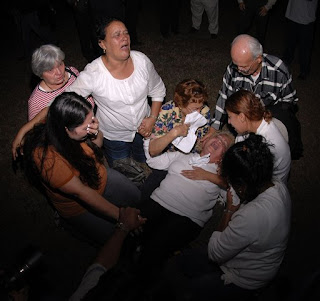 Our View
Executions must stop

When the state of Florida botched Angel Diaz's execution last week, it did so on behalf of all of the citizens of the state, ostensibly in the name of justice. Therefore, we all ought to be ashamed of what happened. It took 34 minutes to kill Diaz, two to three times longer than usual. The needle apparently went through his vein and the drugs ended up in the soft tissue of his arm instead of his bloodstream.


Initially, state prison officials tried to blame the lengthy process on a diseased liver, which might have explained a longer time for the drugs to metabolize. The convicted killer's family said they were not aware of any such condition. Later, an autopsy revealed the execution had been mishandled. Gov. Jeb Bush ordered a halt to executions while this incident is investigated and while lethal injection protocols are studied. Results of the investigations are due by March.

The whole incident calls into question not just whether the drugs themselves are a form of cruel and unusual punishment — as has been the subject of recent lawsuits and appeals — but also whether the process of execution itself is flawed.

Florida's bishops called on Bush to stay this execution, noting, "Through life imprisonment without parole, criminals are severely punished for their transgressions against society."

The bishops did not minimize the anguish of the family of the victim in this case. "Our genuine prayers and sincere sympathies are extended to the family and loved ones of Joseph Nagy, the victim of this crime. We pray not only for the relief of their pain, but also that justice is served. Justice is not best served, however, by the taking of another's life."

Justice has certainly not been served in this case, and in fact, another injustice occurred. Because "the state" put Diaz to death on our behalf, from Gov. Bush to each of us in Florida — whether we support capital punishment or not — we all participated in the act that left Diaz on that table for 34 minutes while the chemicals that were to paralyze him and cause his death slowly worked their way through his body. Gov. Bush had the chance to stop this in advance and he did not.

Even though he will be leaving the governor's office soon, we call on Bush to hold these two teams of investigators accountable.We also implore Governor-elect Charlie Crist to stay any further executions, to not rescind Bush's executive order suspending executions and to hold the investigation teams to the same high standard of accountability to which Bush would hold them.

Last week a federal judge in California placed a moratorium on executions in that state, pending a ruling on whether lethal injection may be cruel and unusual punishment.

That case was unrelated to this local fiasco, but the Diaz incident will likely affect such cases nationwide. Clearly, the application of the death penalty has problems.

These are some of the reasons that the U.S. bishops (and the Catechism of the Catholic Church), while acknowledging that the government has a right, in extremely limited circumstances, to use capital punishment, also asks for our country to stop using the death penalty, because it cannot be applied in a way that is foolproof, in a way that is always fair, and in a way that always guarantees that no innocent person will be executed.