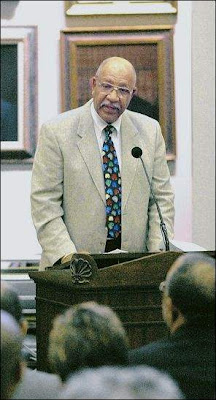 Leander Shaw, 76, was the first African-American chief justice of the Florida Supreme Court. He was on the court for 20 years and was chief justice from 1990 to 1992.

"Every judge strives for justice," Shaw said last week. "To be a good judge is a full-time job."

Shaw retired in 2002 and said that now retirement is his full-time job.

One of the issues on which he took a stand was the unequal application of the death penalty in Florida.

After working in private practice in Jacksonville, he returned to Tallahassee, where he was appointed to the Florida Industrial Relations Commission, then to the First District Court of Appeals and eventually the Supreme Court.

When he retired, many of the tributes concentrated on his rise through a segregated society to the state's high court.