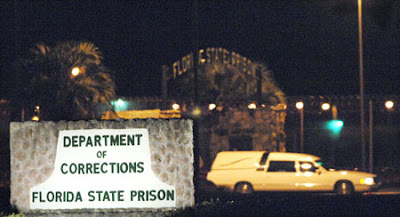 GOVERNOR'S COMMISSION ON THE ADMINISTRATION OF LETHAL INJECTION MEETING TOMORROW (SATURDAY) IN TAMPA.

PRELIMINARY REPORT TO BE PUBLICLY DISCUSSED, DELIBERATED AND DEBATED.


Following the botched execution of Angel Nieves Diaz on December 13, 2006, then-Governor Bush issued Executive Order 06-260 to create The Governor's Commission on the Administration of Lethal Injection. The Commission is charged with investigating the Diaz execution and making recommendations for changes.

This is a public work session to prepare the Commission's Preliminary Report. All testimony is completed. The panel will assess the testimony they have heard during their investigation. They are to deliberate and debate openly and publicly. Many panelists have yet to voice their opinions. After review by the Governor's office, the Final Report is to be released March 1, 2007.

All eyes are on Florida. Since the botched execution of Diaz, ten other states have joined Florida in suspending executions over rising concerns about lethal injection.

Tampa meetings are at the Tampa Airport Marriott. Office Level. Offices of the Florida Bar. Meeting begins at 10AM. Florida Bar Association (813) 879-5151.

Check out this excellent article that summarizes the Commission's meetings: