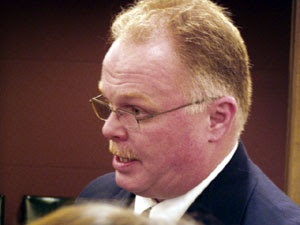 Despite an unusual plea from Gov. Martin O'Malley to end Maryland's death penalty, a bill to repeal the increasingly controversial practice faces an uncertain future.

Death penalty opponents descended on Annapolis yesterday to urge two key committees to end a punishment they believe is costly, ineffective and immoral.

Mr. O'Malley spoke before the House Judiciary Committee and the Senate Judicial Proceedings Committee, which is divided on the bill. It's rare for a governor to testify for bills that aren't part of his own legislative agenda.

In 2005, murder rates were 46 percent higher in states that had the death penalty, Mr. O'Malley said. Besides the possibility of putting an innocent person to death, Maryland has spent nearly $22.4 million extra since 1978 for executions rather than life imprisonment, he said.

"So if the death penalty as applied, my friends, is inherently unjust and without the deterrent value, we are left to ask whether the value to society of partial retribution outweighs the cost of maintaining the death penalty," Mr. O'Malley said.

"Very mindful of and sensitive to the closure, and in some cases the comforts, that it brings to the unfathomable pain of families who have lost loved ones to violent crime, I believe it does not."

The death penalty has been a recurring debate in the General Assembly since 2002, when then-governor Parris Glendening imposed a moratorium on the punishment. His successor, Robert L. Ehrlich Jr., reversed that decision.

Since 1923 the state has executed 83 men, four of whom were from Anne Arundel County.

Other speakers at the committee hearings included former death-row inmates from across the nation who had been exonerated before their executions, including Kirk Bloodsworth.

In 1993 Mr. Bloodsworth, a Maryland resident, was the first in the nation to have a capital conviction overturned through DNA testing.

"I am living proof that our capital punishment system is broken," he said.

Not all those who testified at the hearings were against the death penalty. Even if it doesn't deter future criminals, it prevents known murderers from being able to kill again, said Scott Shellenberger, the prosecutor for Baltimore County.

"I believe in a deterrence of one," he said. "This is merely an extension of a justifiable homicide in order to protect others."

"Who's standing up for the victims of these heinous crimes?" he asked. "Common sense says that it has some (deterrent value)."

It's still not clear whether the repeal can get out of the Senate committee, with five votes lined up on each side.

"It's close. This is a very passionate issue," Mr. Simonaire said. "Where that sixth vote goes is open to discussion."

"He's got the tension," he said. "On each side they have compelling arguments."

During the hearing, Mr. Mooney said he was wrestling with whether taking away the death penalty would endanger correctional officers because criminals already imprisoned could kill without fear of greater retribution.

Other members of the committee against the repeal had the same concern that prisoners serving life sentences would no longer face a deterrent against murdering again.

"Can we really protect ourselves with the prison system?" Mr. Mooney asked. He didn't return a call seeking further comment.

Meanwhile, the question seems less of a dead heat on the House side.

Del. Don Dwyer, R-Glen Burnie,a member of the House Judiciary Committee, said his "gut feeling" is that the bill will get the go-ahead, "but it won't be with (his) vote."

With further advancements in technology such as sophisticated DNA testing, the court system should reach a point where executing an innocent person is almost impossible, he said.

"We certainly should be able to use DNA as a positive proof," Mr. Dwyer said. "It is incumbent upon the state to make sure we are not executing an innocent person."

House Speaker Michael E. Busch said he has voted for the death penalty in the past but is still weighing the decision.

"I'm torn on the issue," he said. "I do believe there's a lack of functionality."

Unlike other issues, positions on the death penalty are very intractable and hard to change, he said.

"It really comes down to people's gut instincts," he said.

Last week, Anne Arundel State's Attorney Frank Weathersbee told the county delegation that the death penalty is a failing system. Mr. Busch said statements like that will factor into any vote he takes.

"There's a part of me that wants to be convinced life without parole has taken (away) the need for the death penalty," he said.

Posted by Turid Sandberg Ihle at 16:00