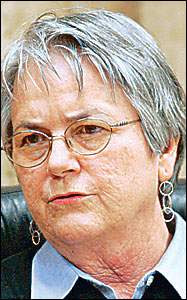 Court of Appeal says she had prejudged death penalty issue in murder trial.

By Dana Willhoit
The Ledger


BARTOW - Circuit Judge Susan Roberts should not preside over the first-degree murder trial of Roy Phillip Ballard because of comments she made about the death penalty, the 2nd District Court of Appeal ruled Friday.

The State Attorney's Office had asked Roberts to remove herself as judge in the Ballard case in January, saying that she had made remarks that indicated she was prejudiced against the death penalty in that case.

Ballard is 65 years old, and during a status conference, Roberts made several remarks to Assistant State Attorney Victoria Avalon suggesting that because of Ballard's age, the state might want to reconsider seeking the death penalty.

Roberts refused to remove herself from the Ballard trial, saying that the State Attorney's Office motion to remove her was "legally insufficient."

The State Attorney's Office then filed a petition with the 2nd DCA seeking to have her removed from the case.

Judges Charles Canady, Craig Villanti and Douglas Wallace of the 2nd DCA wrote: "Upon a careful review of the motion filed in the circuit court for disqualification of the judge, we conclude that the motion was legally sufficient. Accordingly the circuit judge should have … disqualified herself. The State's fear that Judge Roberts had prejudged the question of the appropriateness of the death penalty was thus a reasonable fear, and that fear was a legally sufficient reason for the judge's disqualification."

The three judges wrote that in order for them to determine if a judge should be removed from a case, they must determine "whether the facts alleged would place a reasonably prudent person in fear of not receiving a fair and impartial trial."

It does not matter whether a judge perceives himself or herself as able to be fair and impartial, "but whether a party may reasonably question the judge's partiality."

Chip Thullbery of the State Attorney's Office said Friday, "We are obviously gratified by the decision they reached."

The State Attorney's Office has filed motions asking that Roberts be removed from all 27 first-degree homicide cases in the 10th Judicial Circuit, including the Ballard case. Twenty-two of the cases are in Polk County, and the other five are in Hardee and Highlands counties.

The State Attorney's Office said in its motions that Roberts' rulings and her behavior in the courtroom show that she is biased against the prosecution, that they cannot expect a fair trial before her, and that she makes rulings that are contrary to law.

Roberts has refused to remove herself from any of the cases, and the Attorney General's Office, acting on behalf of the State Attorney's Office, is planning to petition the 2nd DCA in those cases asking that she be removed from those trials.

Chief Judge J. David Langford on Friday said that the DCA opinion could be appealed if Ballard's lawyer, Byron Hileman, filed for a motion for rehearing. If he doesn't file within 15 days, Langford said, then the opinion would become a mandate and he would assign another judge to the trial.

Hileman said he is not planning to file for a rehearing.

"Their rationale was very well set forth. They're the higher authority in this case," he said.

A trial date for the Ballard case has not been set yet. He was accused last year of killing his stepdaughter Autumn Traub, whose body has never been found.