No doctors can monitor N.C.'s executions, so they stop 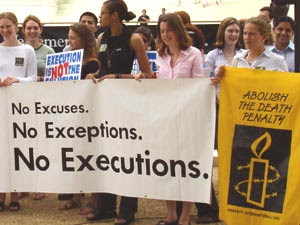 No doctors can monitor N.C.'s executions, so they stop

RALEIGH, N.C. - A legal and ethical bind has brought executions to a halt in North Carolina: A federal judge ruled that a doctor must monitor the condemned for signs of pain. But the state's medical board has threatened to punish any doctor who takes part in an execution.

The result: Gov. Mike Easley says no more executions until the state can "untangle this Gordian knot."

Challenges to lethal injection - namely, whether it violates the Constitution's ban on cruel and unusual punishment - have effectively placed executions on hold in 11 states. The question of doctor participation has figured in some of those disputes.

"It's an inherent flaw of lethal injection that, in order to be reliably humane, it requires the participation of a group of people who are under ethical constraints and considerations," said Mark Heath, an anesthesiologist at Columbia University Medical Center who has studied lethal-injection cases across the nation.

Death-penalty foes and others worry that, if the three-drug combination is administered improperly, the condemned could suffer excruciating pain while immobilized and unable to cry out. Some suspect that is what happened during a botched execution in Florida in December.

Doctors or other medical specialists play some role in a majority of the 38 states with a death penalty, according to Deborah Denno, a Fordham University law professor. But the procedures in many states are vague or even secret, and Denno said she was not aware of any state where a doctor actually administers lethal injections.

Instead, physicians are generally on hand to observe the execution and, in some cases, ensure the injections are administered properly, and pronounce the inmate dead.

In North Carolina, state law requires only that a doctor be present, and that rule has apparently been observed over the years. But last April, a federal judge went further, and said executions could proceed only if a doctor monitored the inmate to prevent pain.

The American Medical Association has said for more than 20 years that physicians who take part in executions violate medical ethics, but the organization has no power to punish. That job falls to the state medical boards that license doctors.

In January - in light of the apparent conflict between the judge's ruling and the Hippocratic oath to "first, do no harm" - the North Carolina Medical Board declared that doctors who do anything "that facilitates the execution" can face disciplinary action.

That dispute, in part, led a state judge to put three executions on hold.

"They seem to have drawn a line in the sand that other medical boards have not done at this point," said Jonathan Groner, an associate professor of surgery at Ohio State University who opposes the death penalty. "I think a lot of us have tried to say, 'Hey, medical boards, you need to do something about this,' but the boards are doctors who have a hard time punishing fellow doctors."

Drew Carlson, a spokesman for the national Federation of State Medical Boards, said the organization was not aware of a medical board reprimanding a doctor for involvement in an execution.

But that possibility was enough to help halt executions in North Carolina, a state where death-penalty opponents have tried for years to persuade lawmakers to suspend capital punishment.

"I wish we had gone to them years earlier," said Stephen Dear of People of Faith Against the Death Penalty, in Carrboro. "We should have."

Elsewhere around the country, a federal judge in Missouri last year ordered reforms to the state's lethal-injection procedures, including the use of a doctor specializing in anesthesia. The state has appealed, arguing that it would not be able to find anyone willing to take part.

In Florida late last year, Jeb Bush, governor at the time, suspended executions after executioners apparently inserted the needles clear through the veins and into the flesh of convicted killer Angel Nieves Diaz. He required a second dose of lethal chemicals. Some witnesses said he appeared to be in pain. An autopsy found chemical burns on his arms.

A medical professional monitored the Diaz execution, but his name and qualifications have not been disclosed because state law protects his anonymity.

In some states, including Arkansas, the medical board specifically allows medical personnel to take part in executions. In others, including Texas - which leads the country with nearly 400 executions since capital punishment was reinstated in 1976 - the board has no policy. In Texas, a doctor arrives after the lethal drugs are administered, and pronounces the inmate dead.