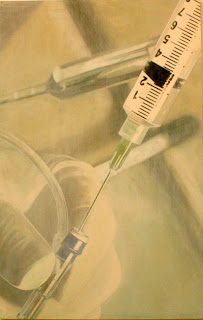 FORT LAUDERDALE - Angel Nieves Diaz craned his neck to see the clock as a blend of lethal chemicals dripped into the intravenous tube snaking into his left arm.

It depends on who is telling the story.

Diaz grimaced as if in pain, his Adam's apple bobbing furiously, his wide-open mouth gasping for air ''like a fish out of water,'' said the convicted killer's attorney, who sat six feet away.

Or, as the Florida State Prison warden tells it, the 55-year-old Diaz fell into a deep sleep, snoring and showing no signs of distress.

Compared with the gallows, firing squad and electric chair, lethal injection has been billed as a more humane, almost antiseptic, way to kill. Of the 38 states that have the death penalty, Nebraska continues to use only the electric chair while 36 other states have turned to lethal injection. Florida offers a choice of injection or electrocution.

But use of the deadly chemical concoction that sedates a person before paralyzing the lungs and causing a fatal heart attack is under increasing criticism across the country.

Executions are now on hold in Florida, California and seven other states as judges and legislators, along with death penalty advocates and opponents, grapple with the issues of how much pain an inmate feels while dying, whether lethal injections constitute cruel and unusual punishment and if a better way can be found to use chemicals for capital punishment.

Fueling the debate is an article in a British medical journal, The Lancet, written by two University of Miami doctors, that suggests condemned prisoners can experience acute pain with the method now in use.

Normally, it takes 15 minutes to execute an inmate by lethal injection. Diaz, who was sent to Death Row for the 1979 slaying of a Miami topless bar manager, required two doses of poison and took 34 minutes to die. An autopsy after the Dec. 13 execution revealed 2-foot-long chemical burns on his arm because the toxins from an improperly inserted needle flowed into his flesh, not his veins.

''Lethal injection was all about sensibility, all about appearances. We thought we were executing people in a kinder, more humane manner,'' said David Elliott, communications director of the Washington-based National Coalition to Abolish the Death Penalty. ''Now we know there is no kind, nice and humane way to execute someone.''

But Michael Rushford, president of the Criminal Justice Legal Foundation, a Sacramento-based group that supports the death penalty, said the current combination of drugs leads to a humane death if administered properly.

''Even anesthesiologists who are against the death penalty say if you use the chemicals in the correct sequence and the painkiller is introduced first, there is no question the murderer will feel no pain,'' he said. ''Obviously, if you miss the guy's vein, you've got a problem.''

A few states are considering changing the injection to use only a heavy dose of barbiturates, a procedure that will end in death but perhaps take twice as long as the current chemical mix. Rushford promotes the alternative of carbon monoxide poisoning as quick and painless.

In December, outgoing Gov. Jeb Bush placed a moratorium on Florida executions until a commission could study what went wrong and issue a final report, due March 1. (EDITORS: BEGIN OPTIONAL TRIM)
''The amount of time it took isn't the issue. The question is whether he was in pain. Did he suffer?'' said Republican state Sen. Victor Crist, a member of the commission. ''We have to ensure justice is met, but that it is met in the most humane way possible.'' (END OPTIONAL TRIM)
At the moment, Florida law sets stricter limits on the drugs used to euthanize animals than for executions, an irony not lost on the U.S. Supreme Court when considering a challenge to the state's death penalty. It's up to the Florida Department of Corrections to establish the procedure for administering the lethal injection, but Justice John Paul Stevens queried why the process wasn't spelled out in state statute as it is for animals.

''There must have been a legislative feeling that unless that procedure were followed, there's a risk of undue pain to the dogs and cats,'' Stevens said. ''Why isn't there a similar basis for believing that if you don't follow a similar procedure that such a risk might be present for human beings?''

Illinois and New Jersey are now reconsidering the viability of the death penalty. But executing those who kill remains popular nationally. A Gallup poll last year revealed that 71 percent of Americans view the death penalty as morally acceptable. In Florida, where support of the death penalty has virtually been a prerequisite for a candidate to win statewide office, polls show 60 percent or more of voters approve state-sanctioned death.

''I have never seen a survey in Florida that didn't show the death penalty to be fairly popular,'' said Jim Kane, a Fort Lauderdale pollster. ''The screw-ups with lethal injection have some mitigating effects, but I don't think it's major.'' (EDITORS: STORY CAN END HERE)
Oklahoma was the first state to adopt lethal injection as a method of execution in 1977. The three-chemical cocktail was concocted by Dr. Jay Chapman, the state's medical examiner, who last year told The New York Times that he would now recommend only an overdose of barbiturates. He has also criticized the lack of training of those who administer the injection. Physicians are prohibited by the American Medical Association from taking part in executions.

The only requirement for an executioner in Florida is that he or she be 18 years of age and ''fully capable'' of performing the job's functions. The pay is $150 per execution. Dr. David Lubarsky, chairman of the anesthesiology department at the University of Miami, co-authored the Lancet study on lethal injection that concluded the procedure is not painless.

The study of 49 autopsies found many instances where there wasn't enough sedative in the inmate's system to prevent awareness and pain.

''It comes up all the time that these people are worse than animals . . . but that doesn't mean we should lower ourselves to their level,'' said Lubarsky. Angel Diaz, he said, likely felt he was suffocating because ''none of the drugs went into his bloodstream. It was like being buried alive by drugs.''