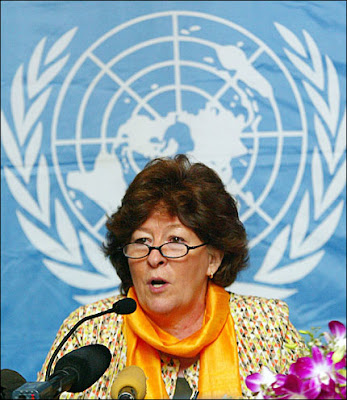 More than half the countries in the world have banned the death penalty. This includes every one of the 45 countries in the Council of Europe that have ratified the European Convention for the Protection of Fundamental Freedoms and Human Rights.

The Italian government has called for a full and universal moratorium on executions. This has been supported by many European governments. The United Nations, as an institution, is against the death penalty and UN human rights bodies have frequently condemned capital punishment as a violation of the right to life.

When the the death penalty after an unfair trial is illegal everywhere and under all circumstances.

In September 2006, after a New York Times article exposing several executions in Iraq, the international community queried Iraqi authorities about the alleged execution of a dozen Iraqis after an unfair trial. But since so little was known about the trials -- the United States and Iraqi authorities collaborating to ensure that little information about these trials was made public -- that concern melted into silence.

After -- and ominously not before -- the execution of Iraqi President Saddam Hussein on 30 December 2006, numerous governments and UN officials raised questions about executions taking place after proceedings that were widely considered to be unf and Iraqi authorities were undaunted by this public condemnation.

One would think that any humane-thinking government would stop executing people after unfair trials in the face of such strong condemnation. Instead, the US government and its Iraqi collaborators seem to become thirstier for the blood of Iraqis as their hideous deeds are exposed.

It is they are accomplishing some perverse cleansing of the communities they hate.

the same in Libya as they struggled for a decade to put down the liberation movement of Omar Mukhtar.

In modern times, the US is unique among countries of the world in the barbarity of its executions. It applies the death penalty to children, physically and mentally disabled people, and women in some of the most inhumane ways. Not only has the American American Commission on Human Rights, and the courts of European countries. Even the International Court of Justice has condemned the US government for carrying out executions after unfair trials in which foreign defendants were not allowed the consular rights that the US had agreed to provide them.

It is win t f spilling the blood of their own people.

A striking example of the shameless killing of Iraqis is the case of three Iraqi women who are currently facing imminent execution by Iraqi authorities after unfair trials. In Baghdad's Al-Kadhimiya Prison, Mrs Wassan Talib, 31, Mrs Zainab Fadhil, 25, and Mrs Liqa Omar Muhammad, 26, are waiting to be executed after a trial that Amnesty International condemned as unfair.

Allegedly none of three women were legally represented and none of them had adequate time or facilities to prepare a defence. It is not even clear if they had a trial. As The New York Times pointed out in September 2006, some trials resulting in the death pe evidence that it claimed it had in its possession and which the defence repeatedly requested was not provided. One can only imagine what evidence, if any, was proffered against these three women.

All three women were charged with the vague offence of acting against the public welfare in paragraph 156 of the Iraqi Penal Code. This provision states that, "Any person who wilfully commits an act with intent to violate the independence of the country or its unity or the security of its territory and that act, by its nature, leads to such violation is punishable by death."

And while the three young women await execution, two of the women are taking care of small children; one is raising a 1-year-old daughter who was born in prison.

Such unfair spectacles do not even meet the minimum definition of a "trial", instead they are merely examples of the "war crime" of wilfully providing prisoners of war or civilians unfair trials.

The in which children are orphaned to gain the approval of Americans who have not only invaded Iraq, but who have also raped and killed Iraqis with immunity from prosecution by Iraqi courts.

Ironcause the same soldier could easily have ended up with a life sentence for killing an American. Not one American soldier has been sentenced to life in prison for killing an Iraqi.

While the international community has constantly and increasingly condemned executions in Iraq with words, no action has been taken to date. No use has been made of the articles in the Geneva Conventions protecting civilians and prisoners of war from an unfair trial. These provisions require all states to search for and bring before its courts any person involved in an unfair trial.

ral vacuum, the international community is using words where words have been proven to fail, watching passively as Iraqis kill Iraqis at the behest of the their American partners.

Does such inaction mean that the international community is too cowardly to act against those who are collaborating with the American military? Does it mean that the condemnation of the death penalty by more than half the countries in the world, as well as the UN, is merely an empty gesture? Does it mean that the lives of Arabs and Muslims are worth less than their own lives to Americans and their allies?

Three Iraqi women are about to give their lives to prove that the answer to all three questions is a resounding "yes".

* The writer is professor of law at An-Najah National University in Nablus, Palestine.