'As if in pain': Notes from Diaz execution 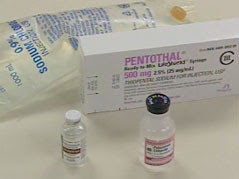 'As if in pain': Notes from Diaz execution

STARKE - The curtains separating the witness room from Florida's execution chamber open right at 6 p.m. every time. You can tell because there is a digital clock on the wall.

I witnessed three executions at Florida State Prison last year. In the first two - Arthur Rutherford and Danny Rolling - the inmate stopped moving a few minutes after the curtains opened. Both were pronounced dead at 6:13 p.m.

But the Dec. 13 execution of Angel Diaz took much longer. He moved for a long time and wasn't pronounced dead until 6:36 p.m.

What happened in those 36 minutes has become a matter of debate.

Newspaper reports - including my own - said Diaz grimaced, winced or appeared in pain. I reported that Diaz's "body shuddered." I also noted that for several minutes his mouth was "flexing like a fish out of water."

Department of Corrections officials who participated in or witnessed the execution said they saw no such thing. They said Diaz asked what was happening, tried to look at a clock and snored.

How could there be such a conflict?

Before members of the press enter the witness room, the Department of Corrections provides each reporter with a legal notebook and two pencils. The journalists are the only people in the building who take detailed notes of what happens.

What follows is an exact transcript of the notes I took during the execution.

6 p.m.: Diaz turns head and mumbles his last statement. Eyes slightly bloodshot and bleary. thatch of black and white hair. Turns head back up and is strapped.

6:06: Cheek bones pinch up. Talking still. As if in pain. Wrinkled eyes. Squints. Guards act like nothing wrong.

6:08: Even juts up chin and stiffens his body. Talking and tensing his body.

6:12: His head faces to the right toward audience. He coughs several times. Shudders. Face reddening.

6:13: Still breathing. His body tenses and he coughs again.

Several issues have come up with regard to the viability of lethal injection as the preferred method of execution.

Generally, they are
1) The inmate experiencing pain during execution;
2) The ethics of medical professionals participating in executions; and
3) proper training of execution personnel.

The evidence, including the immediate autopsy of executed serial murderer/rapist Michael Ross, supports that there is no pain within the lethal injection process.

The alleged concern is that some inmates may have been conscious, but paralyzed, during execution, because one of the three drugs used may have worn off, prior to death.

First, there is no evidence this has occurred. Secondly, if properly administered, it cannot occur with the properties and amount of the chemicals used and within the time frame of an execution.

An Associated Press reporter correctly stated that  "there is little to support those claims except a few anecdotes of inmates gasping and convulsing and an article in the British medical journal Lancet." (AP, "Death penalty foes attack lethal-injection drug", 7/5/05)

The British Medical Journal, The Lancet, published an article critical of lethal injection. The article did not/could not identify one case where evidence existed than an inmate was conscious during execution.

The Lancet article identified 21 cases of execution where the level of "post mortem" (after death) sodium thiopental was below that used in surgery and, therefore,  may suggest consciousness was possible.

A more accurate description would be all but impossible.

A "long after execution" post mortem measurement of sodium thiopental is very different from a moment of death measurement.

Dr. Lydia Conlay, chair of the department of anesthesiology, Baylor College of Medicine (Texas Medical Center, Houston) said the extrapolation of postmortem sodium thiopental levels in the blood to those at the time of execution is by no means a proven method. "I just don't think we can draw any conclusions from (the Lancet study) , one way or the other."

Actually, we can. The science is well known.  Sodium thiopental is absorbed rapidly into the body. Long after execution blood testing of those levels means absolutely nothing with regard to the levels at the time of execution.

The Lancet article did not dispute the obvious --  for executions,  the sodium thiopental is administered in dosages roughly 10-20  times the amount necessary for sedation unconsciousness during surgical procedures.

Unconsciousness occurs within the first 30 seconds of the injection/execution process. The injection of the three drugs takes from 4-5 minutes. Death usually occurs within 6-7 minutes and is pronounced within 8-10 minutes.

The researchers also failed to note the much lower probability (impossibility?) that the murderer could be conscious, while all three drugs are coursing through the veins, concurrently.

Despite the Lancet article's presumptions and omissions, there is no scientific evidence that consciousness could occur with the amounts and methods of injecting those three chemicals within the execution period.

The AP article also stated that "They (death penalty opponents)  also attack lethal injection by saying that the steps to complete it haven't been reviewed by medical professionals."

That is irrelevant. It is not a medical procedure. Intravenous application of various chemicals has been successfully used for many, many decades.  Criminal justice professionals have been trained in this application.

The chemicals used in lethal injection, as well as their individual and collective results, at the dosages used, are also well known.

Lethal injection is not a medical procedure, but the culmination of a judicial sentence carried out by criminal justice professionals, the result of which is intended as death, the outcome of every case.

Opponents of the death penalty, as well as other uninformed or deceptive sources, have been stating that even vets do not use the paralytic agent in the euthanasia of animals. This is a perversion of the veterinary position, which actually provides support for the human execution process.

Some fact checking is in order  -- www(dot)avma.org/issues/animal_welfare/euthanasia.pdf

The below is a paraphrase of parts of that article, including some exact quotes.

Results of the autopsy done on serial killer Michael Ross are being cited by several prominent doctors to refute a highly publicized article that appeared in The Lancet, the British medical journal, in April, 2005.

Dr. H. Wayne Carver II, Connecticut's chief medical examiner, was aware of the controversial Lancet article before performing the Ross autopsy. As a result, he took the additional step of drawing a sample of Ross's blood 20 minutes after he was pronounced dead at 2:25 a.m. May 13. Carver took a subsequent sample during the autopsy, which began about 7 hours later, at 9:40 a.m.

Dr. Jonathan Groner, a pediatric surgeon from Ohio said he interviewed a number of forensic toxicologists before adopting the view that thiopental in a corpse leaves the blood and is absorbed by the fat, causing blood samples taken hours after death to be an unreliable marker of the levels of thiopental in the body at the time of death.

Groner described the Ross autopsy results as "a powerful refutation" of the Lancet-Koniaris study.

Dr. Ashraf Mozayani, a forensic toxicologist with the Harris County Medical Examiner's Office in Texas, said the level of thiopental "drops quite a bit" after death. Even in the living, Mozayani said, thiopental levels decline rapidly after administration of the drug. She cited one study in which a patient was administered 400 milligrams of thiopental intravenously. After two minutes the concentration in the blood was measured at 28 milligrams, but dropped to 3 milligrams concentration 19 minutes after the anesthetic was injected.

On The Lancet article, she said, "I don't think they have the whole story - the postmortem redistribution and all the other things they have to consider for postmortem testing."

Medical groups cite that there is an ethical conflict for participation in the lethal injection process, because medical professionals have a requirement to do no harm.

Physicians are often part of double or triple blind studies where there is hope that the tested drugs may, someday, prove beneficial. The physicians and other researchers know that many patients, taking placebos or less effective drugs, will suffer more additional harm or death because they are not taking the subject drug or that the subject drug will actually harm or kill more patients than the placebo of other drugs used in the study.

They knowing harm individual patients, in direct contradiction to their "do no harm" oath.

For the greater good, they sacrifice innocent, willing and brave patients.

Note, that the willing is irrelevant, from an ethical standpoint. "Do no harm" is "do no harm". Physicians knowingly make exceptions to their do no harm requirement, every day, within their profession, where that code applies.

Justice, deterrence, retribution, just punishments, upholding the social contract, saving innocent life, etc.,  are all recognized as aspects of the death penalty, all dealing with the greater good.

Are murderers on death row willing participants? They willingly committed the crime and , therefore, willingly exposed themselves to the social contract of that jurisdiction.

Lethal injection is not a medical procedure. It is a criminal justice sanction authorized by law. Therefore, there should be no ethical conflict with medical codes of conduct.

In every state, there are hundreds or thousands of people trained for IV application of drugs or the taking of blood.  Sadly, even hard core drug addicts are proficient in IV application.

It appears that some 500-1000 innocent patients die, every year, in the US, due to some type of medical misadventure, with anesthesia. (1)

I am unaware of evidence that shows criminal justice professionals are more likely to commit some error in the lethal injection process, than are medical professionals in IV application. Furthermore, even with errors in lethal injection, those cases resulted in the death of the inmate - the intended outcome for the guilty murderer. In the errors of medical professionals, we are speaking of death or other harm to innocent patients - the opposite of the intended outcome.

originally written May, 2005. Updated as merited.

Mr. Sharp has appeared on ABC, BBC, CBS, CNN, C-SPAN, FOX, NBC, NPR, PBS and many other TV and radio networks, on such programs as Nightline, The News Hour with Jim Lehrer, The O'Reilly Factor, etc., has been quoted in newspapers throughout the world and is a published author.

A former opponent of capital punishment, he has written and granted interviews about, testified on and debated the subject of the death penalty, extensively and internationally.

Permission for distribution of this document is approved as long as it is distributed in its entirety, without changes, inclusive of this statement.

Life in prison with its daily exposure to rape, brutality and confinement is not only truly cruel, but it is also very unusual punishment. The gentle, sterile injection of lethal drugs is the merciful, easy way out.

As a advocate for Life in prison, and all manners of PRO LIFE, including DP, I want to ask why should we care if they grimace in pain for 15 min? Most people who received the DP put their victims through a lifetime of hell, and eventual death. If it was up to me, I would lock them in jail with ticks, fleas, mosquitoes, and spiders for 100 years. One can almost wonder if that type of punishment would deter sick criminals that get the DP.

Pubic hangings! You have to have a deterrent, so sorry these people who have destroyed human lives in the sickest way have or might feel pain with lethal injections.wonder what pure hell these people did to their victims.It makese sick how much it cost to put people on death row.