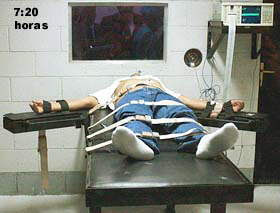 By Dara Kam (dara_kam@pbpost.com)
Palm Beach Post Capital Bureau
Thursday, May 10, 2007
TALLAHASSEE — With the intention of soon resuming executions, Florida will make some changes in its death penalty protocol but will not change the lethal cocktail used in a botched execution five months ago, prison officials said Wednesday.
The new protocol would require that executions be presided over by two new wardens other than the chief of the prison where Death Row convicts are housed. The new wardens presiding over executions also would be required to receive training in determining whether the first drug in the cocktail actually renders the inmate unconscious.
But the changes do not go as far as putting a medical expert such as a doctor in charge of an execution, despite pleas from advocates for the condemned who say that someone without a medical background is ill-prepared to decide if the procedure is working correctly.
"After a very preliminary reading of the protocol, it would appear that it does not resolve all of the problems that existed before," said Suzanne Keffer of the Capital Collateral Regional Counsel, a state agency that represents Death Row inmates.
Florida Department of Corrections Secretary Jim McDonough announced the changes Wednesday, saying he planned to submit them to Gov. Charlie Crist. All the changes, including a plan to enlarge the room where the lethal injections are prepared, could be accomplished within two weeks, McDonough said.
He said they were based on 37 recommendations, with some modifications, offered by a governor's task force.
Gov. Jeb Bush created the panel and suspended executions after the Dec. 13 execution of Angel Diaz, which lasted 34 minutes.
Witnesses said Diaz, 55, gasped and grimaced, and experts later testified he probably experienced pain because a numbing drug - the first of the three-drug lethal concoction - had worn off before subsequent drugs were administered.
As a result, the new execution chiefs - two Florida prison wardens whom officials refused to identify - and their teams have already received federal training that included how to ascertain consciousness, through touch and talking.
McDonough said insults hurled at Diaz by prison staff members during the execution spurred him to recommend putting more objective wardens in command.
"The innuendo has been there that this is not done in an objective professional manner when you have those involved in the execution itself who are working in and around the condemned for a period of time," said McDonough, who declined to elaborate about the insults.Other changes include doubling the size of the "chemical room," where the injections are prepared; making the execution chamber brighter so observers can see the procedure more clearly and take better notes; requiring at least two Florida Department of Law Enforcement observers to witness executions and take notes at least every two minutes; installing a clock that witnesses within and outside the chamber can view; and locking the condemned into position to reduce the chance that movement could derail injection of the drugs.
Posted by Serena at 06:41

Very informative post! There is a lot of information here that can help any business get started with a successful social networking campaign! Help with alcohol abuse