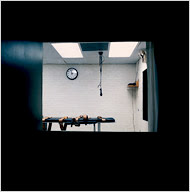 OCALA - Attorneys jousted in the courtroom Monday, and at times rudely cut each other off during a death penalty hearing.

It was the second day of testimony in the Ian Deco Lightbourne death penalty case. His attorneys are arguing the botched execution of Angel Diaz last year is a clear example of why the death penalty is cruel and unusual.

Several Florida Department of Corrections employees are exempt from public disclosure if they are involved in an execution.

One witness, Dr. Rodrigo Quintana, testified about procedure as part of medical staff in an unrelated 2001 execution and appeared annoyed when answering defense questions.

"I must ask why the state of Florida didn't protect my name," Quintana testified.

Diaz was executed by lethal injection on Dec. 13, 2006. His death took 34 minutes - twice as long as it usually takes. Authorities had to administer a second dose of the lethal drugs to kill him.

Executions were halted in Florida pending an investigation of Diaz's death. They are set to resume as early as this month.

Several witnesses, including Diaz's lawyer, his Catholic spiritual adviser and reporters, recalled what appeared to be a painful execution. Diaz's torso apparently arched up and down, his face grimacing. He appeared to be gasping for air and there was obvious tension in his head and neck.

An independent observer from the Florida Department of Law Enforcement testified Friday that the execution was not typical and Diaz had one red, blotchy mark and another spider-web vein marking on his arms where the IV's were inserted.

Lightbourne's attorneys are arguing the death penalty is cruel and unusual punishment and are using Diaz's death as a reason to not administer it.

Maj. William Muse testified Monday that the death appeared normal and that no one at the staff briefing after the death expressed any concerns. He also pleaded ignorance on whether he saw Diaz in pain or red markings on his arms.

"The only concern I heard was from the media," Muse testified.

He also said during the execution he had his own problems. "My eyes were looking straight forward. I wanted to be professional. The only thing I noticed was that .Ê.Ê. my legs hurt," Muse said.

Circuit Judge Carven Angel had questions of his own. He asked several witnesses about a timeline of events and the time of death for Diaz.

Witnesses testified the DOC does not have records keeping track of the exact times when drugs are administered or how long a person takes to die.

Warden Randall Bryant testified Diaz took about 23 minutes to die and slashed several minutes off the 34-minute time count for set-up and other routine procedures.

"How do you know what that time was," Angel asked. "In other words, you don't keep a record of that time,. so how do you know for certain? How can you say it was 23 minutes?"

Lightbourne, 47, was sentenced to death in 1981 for the murder of Marion County horse breeder Nancy O'Farrell, the daughter of a prominent horse farming family.

Hearings in the Lightbourne death case will resume sometime in late June or July. He is being represented by Suzanne Keffer, of the Capital Collateral Regional Counsel's office.