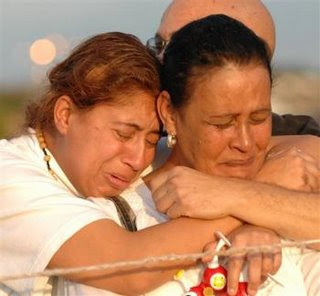 TALLAHASSEE - Gov. Charlie Crist said Wednesday that he is ready to resume lethal injections after the prison system announced changes to its death penalty procedures.
Department of Corrections Secretary Jim McDonough made the changes - including enlarging the death chamber and increasing training - to avoid a repeat of the botched execution of Angel Diaz five months ago.
Executions have been halted since Dec. 13, when it took 34 minutes to kill Diaz, twice as long as normal.

Crist, who was in South Florida on Wednesday, told the Miami Herald he's ready to start signing death warrants now that McDonough had reported the improvements.
"I need to carry out my duty as governor," Crist said.
The prison system's report concurs with 37 recommendations set forth by a committee then-Gov. Jeb Bush formed after the Diaz controversy.

Though accounts vary, some witnesses saw 55-year-old Diaz - condemned for the 1979 murder of a topless-club manager in Miami - clenching during the procedure, suggesting he felt pain.
A review found that needles went through his veins, sending the lethal drugs into his flesh, not his bloodstream.

Chamber's changes
To avoid future problems, the death chamber at Florida State Prison is being doubled in size to give execution teams more space, McDonough said.
A team of nearly 20 has also gone through extensive training in Terre Haute, Ind., where federal executions are held. A clock in the execution chamber has been positioned to be visible to all officials and witnesses.

Also, videocameras have been installed. The bed an inmate is put on will be locked in place to minimize movement while the injection is taking place.

But McDonough said the department will continue to use the same three-drug cocktail used to execute Diaz. The Governor's Commission on Administration of Lethal Injection recommended Florida explore other chemical mixes.
"The department will continue to monitor developments in pharmacology to determine if and when it is appropriate to substitute other chemicals into the process," McDonough said in his written response to Crist.

Death row defense lawyer D. Todd Doss, who represents Diaz's family, said he doesn't think the new execution protocol will solve all the death chamber's problems. He said the procedures still would allow for another botched execution like Diaz's.
"There are still some serious concerns there," said Doss, who reviewed the DOC's new procedures Wednesday afternoon. "They didn't outline training and qualifications. It's discretionary with no guidance whatsoever. There's still not very good auditing procedures."
Diaz's executioner said earlier this year that he did not rehearse with the rest of the team and hadn't received any training in seven years.
Doss also complained that the protocols still call for the curtains between the execution chamber and the witness room to be closed if something goes wrong, something that wasn't done during Diaz's execution.

Differing accounts
Though newspaper reporters who attended the Diaz execution reported seeing him wince, squint and cough as if he were in pain, DOC officials said they didn't see anything like that.
"Would we know as much as we do today if they had shut the curtains in Diaz? It's only because (the media) were there that we know what happened because they didn't shut the curtains," Doss said. "If not for that, we would have been told nothing happened because that's what the DOC people said, that nothing happened."
Whether Diaz felt pain is important because the U.S. Constitution forbids punishing people with techniques that are cruel.
McDonough said the primary objective of the changes is to assure "a humane and dignified death."

Information from the Associated Press was used in this report.