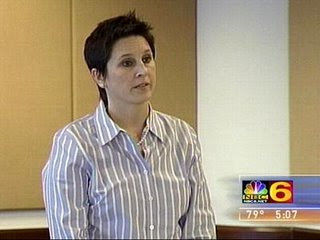 1981 DEATH SENTENCE BACK IN COURT

OCALA - Angel Diaz's spiritual adviser testified for the first time on
Friday about the convicted killer's botched execution and how the death
affected him.

He recalled an emotional phone call to his wife on his drive home and the
images of a man who appeared to be struggling to live.

"I told her I had just watched a man be tortured to death," testified Dale
Recinella, a volunteer Department of Corrections Catholic lay minister.

Testimony from Recinella and others on Friday was part of a series of
hearings being held in the Marion County case of a death row inmate, Ian
Deco Lightbourne, 47. His lawyers contend the death penalty is cruel and
unusual punishment and are using the Diaz execution to help prove their
case.

Diaz was executed by lethal injection on Dec. 13, 2006. His death took 34
minutes - twice as long as it usually takes. Authorities had to administer a
second dose of the lethal drugs to kill him. Executions were halted in
Florida pending an investigation of Diaz's death. They are set to resume as
early as this month.

Lightbourne was sentenced to death in 1981 for the murder of Marion County
horse breeder Nancy O'Farrell.

Recinella knew Diaz since 1998 and was asked to pray with him and console
his family. But by the end of the execution, Recinella said he was in shock.

He said it seemed to be a "painful" death. Recinella recalled Diaz's torso
arching up and down, his face grimacing. He gasped for air and there
appeared to be much tension in his head and neck area.

"He looked at some points as he was trying to speak in a forcefully way ...
to the staff and then he began to show signs of his body arching. His torso
was arching and ... it seemed like it was an involuntary reaction," the
minister testified as he demonstrated Diaz's body movements and facial
expressions.

It was the first time Recinella testified about the death. He had refused to
testify to a commission studying the execution because of his job -
Recinella said he doesn't talk about his ministry unless he's forced to by
subpoena. His testimony was similar to that of news accounts of the
execution.

In an earlier ruling, journalists were not forced to testify about the case.

Department of Corrections employees told a different version. They say the
execution was apparently normal and not as sensationalized as media outlets
and the minister have portrayed it to be.

Another witness was Timothy Westveer, a Florida Department of Law
Enforcement internal investigations inspector who witnessed the execution.
All executions are witnessed by independent officers from FDLE to ensure the
condemned's rights are protected.

Westveer testified the execution took longer than normal and that Diaz's
body moved more than those of other people whose lethal injection executions
he has witnessed.

At one point, while medical staffers were getting the second dose of
chemicals, one told him Diaz was having problems with the drugs because of a
liver condition that was metabolizing the chemicals slowly.

"Yes, I did notice some redness on the inside of his left arm and right
arm," he said, referring to a round red mark on one arm and red spiderlike
vein patterns on the other.

"It was pretty obvious it was there. It was an attention getter."

Lightbourne has been scheduled for execution twice before and has been
granted two stays. He does not currently have a death warrant.

Life in prison with its daily exposure to rape, brutality and confinement is not only truly cruel, but it is also very unusual punishment. The gentle, sterile injection of lethal drugs is the merciful, easy way out. Pain, if any, would be very minimal if at all. And nothing compared to the pain of daily prison existence.