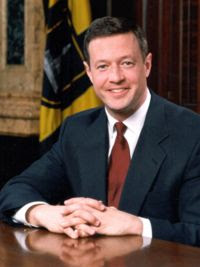 1976: U.S. Supreme Court rules that the death penalty is legal.

1987: General Assembly adds life without the possibility of parole to the books as a sentencing option.

1994: General Assembly authorizes injection as the state's method of execution.

May 9, 2002: Gov. Parris N. Glendening imposes a moratorium on the death penalty while a state-ordered University of Maryland study of capital punishment is conducted. The study would conclude there are racial and geographic disparities in the application of the death penalty in the state.

Jan. 15, 2003: The execution moratorium is effectively lifted when Robert L. Ehrlich Jr. is sworn in as governor.

June 17, 2004, at 9:18 p.m.: Steven Howard Oken is executed for the rape and murder of a White Marsh newlywed at the start of a crime spree in 1987 that included the killings of two other women.

Dec. 5, 2005 at 9:18 p.m.: Wesley Eugene Baker is executed for killing a Baltimore County elementary school teacher's aide in front of her grandchildren in a 1991 robbery.

Dec. 19, 2006: Maryland Court of Appeals rules that executions cannot continue in Maryland until the legislature approves regulations for lethal injection procedures, or passes a law saying that such rules are not required.

[Jennifer McMenamin]
Posted by sisselnor at 06:53