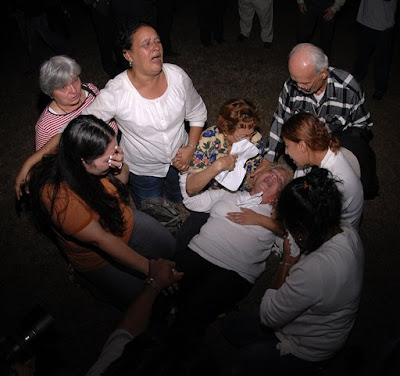 A state investigation found that the botched execution of Angel Diaz last month deviated from procedure in several significant ways.

Now a commission created by the governor will further study the execution, holding its first meeting Monday. But doctors involved in the group may face ethical issues about proposing changes to the lethal injection procedure.

Diaz appeared to shudder, grimace in pain and gasp for air during his Dec. 13 execution, before he stopped moving 24 minutes into the process and was declared dead 10 minutes later. The execution lasted nearly three times as long as normal.

The next morning, Department of Corrections Secretary James McDonough formed a task force to look into the execution. The task force issued a report Dec. 20 that found execution team members didn't report problems injecting an IV and defied procedure in changing the way the lethal drugs were dispensed.

The state has since stopped all executions and convened the commission to further investigate the lethal injection procedure. The group is scheduled to issue its report March 1.

The commission includes Gainesville Circuit Judge Stan Morris, who says the group will study problems and make recommendations on changes.

But making recommendations could create a dilemma for the three doctors on the commission. American Medical Association guidelines ban doctors from participating in executions in any way.

Dr. William G. Plested III, the AMA president, said he would advise doctors on the commission to recuse themselves from helping develop new lethal injections procedures.

Tampa anesthesiologist Dr. David Varlotta is one of the doctors on the commission. He said he's waiting to hear more about his role on the commission, but will be using medical ethics to guide his involvement.

The commission will be looking at an execution procedure similar to the one used in the 36 other states that use lethal injection. Florida and other states use a three-chemical cocktail to kill inmates.

The inmate is first injected with a sedative called sodium pentothal, followed by a paralytic called pancuronium bromide that freezes the muscles. A deadly drug called potassium chloride is then injected to stop the inmate's heart.

If problems occur in Florida, procedures require execution team members to check the IV line dispensing the drugs. If members determine the line isn't working, a switch is made to an IV line in another arm. If that doesn't work, team members are supposed to insert a line in another vein.

But the Diaz execution deviated from those procedures. According to the investigation, execution team members had problems inserting an IV line in Diaz's arm and failed to report those problems to the prison warden, as required.

Once the execution started, the executioner noted that the chemicals were taking two to three times longer than usual to push through the line into Diaz's left arm. In the middle of dispensing the paralytic, the executioner could no longer push the syringe.

A decision was made to dispense the rest of the paralytic and the final deadly drug into an IV in Diaz's right arm. But even after that, a heart monitor indicated he was still alive.

The executioner then started administering a second round of drugs. The sedative was dispensed into Diaz's right arm. But against procedure, the executioner decided to skip the paralytic and move immediately to dispensing the deadly drug into Diaz's left arm.

Alachua County Medical Examiner Dr. William Hamilton later said the errant IV caused the lethal cocktail of drugs to seep into Diaz's flesh rather than his veins. If the drugs had been been pumped into Diaz's bloodstream, they would have circulated throughout his body faster and worked more quickly. Instead, the drugs caused nearly footlong chemical burns on both of Diaz's arms, according to the examiner.

A full autopsy on Diaz is still pending release.