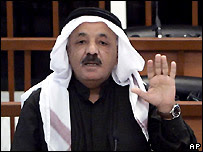 An Iraqi court has postponed a decision on whether to execute
Taha Yasin Ramadan, who was vice-president under
Saddam Hussein.

Three of his co-defendants, including ex-President Saddam Hussein have

already been executed by hanging.

The Iraqi High Tribunal adjourned the hearing until 12 February after

because they were not notified, judge Ali al-Kahishi said.

Court - were sentenced to death for the Dujail killings.

Saddam Hussein was hanged on 30 December. Barzan and al-Bandar

were hanged on 15 January.

All three executions have been criticised by the international community.

while a seventh defendant was acquitted.