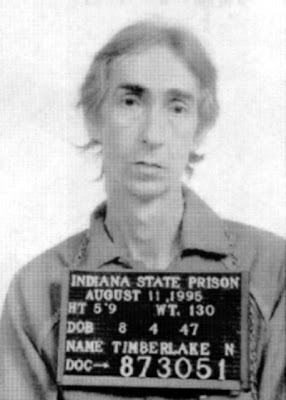 Although a judge has stayed the execution of Indiana prisoner Norman
Timberlake, his sentence has not been commuted to life in prison. He was
sentenced to death in Marion County for the February 1993 shooting of
Michael Greene, an Indiana State Police trooper who stopped Timberlake for
drunken driving. This man was and is suffering from severe paranoid
schizophrenia and is psychotic.

The facts are as follows:

- Timberlake is incompetent to be executed, because he suffers from chronic
paranoid schizophrenia, is actively psychotic and suffers from
hallucinations. He believes he is being tortured by a machine and is being
executed so that the existence of the machine will remain secret. This
schizophrenia has been present and observable since he was first
incarcerated 13 years ago.

- He was denied due process in the Indiana courts because the Indiana
Supreme Court refused to appoint and pay counsel to represent him in state
proceedings challenging his competence to be executed, refused to grant him
funds to hire a mental-health expert to assist his volunteer attorneys,
refused to allow his volunteer attorneys to discuss his case with its
court-appointed psychiatrist and did not hold a hearing before issuing a
decision based on the report of its court-appointed psychiatrist.

- He has been unable to assist his pro-bono counsel in his defense due to
his delusions and hallucinations.

Of course, shooting a police officer is one of the most heinous crimes that
can be committed. But executing a severely delusional and psychotic man who
does not even understand the execution process or exactly why he is being
executed is unconscionable. Indiana should not join the ranks of states
willing to execute such prisoners.

Timberlake's appeal now surrounds the notion of whether he is sane enough to
be executed. Two horrific wrongs certainly will never add up to right! NAMI
Fort Wayne pleads with Gov. Mitch Daniels to not permit this act by the
state of Indiana and to commute Norman Timberlake's sentence to life in
prison without parole.

The American Bar Association, American Psychiatric Association, American
Psychological Association, Mental Health of America, National Alliance on
Mental Illness and other organizations have banded together and agreed on
definitions and a resolution outlawing the execution of a person who is
severely mentally ill and psychotic at the time of a capital crime. Our
national laws are swiftly moving in the direction to add severe mental
illness to the existing list of exemptions for those who are mentally
retarded and those younger than age 18.

NAMI Fort Wayne pleads with the residents of Indiana: Please do not allow
Timberlake to be the last seriously mentally ill person to be put to death
in Indiana. Please, Gov. Daniels, let that barbaric practice be stopped now
under your watch.