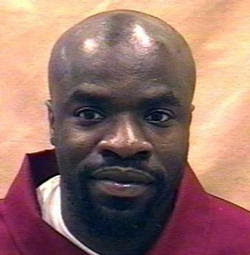 RALEIGH, N.C. - A death row inmate asked the U.S. Supreme Court on Wednesday to stop his execution so the courts can review evidence that he has a long-standing brain injury.

The petition came as Marcus Reymond Robinson, 33, waited in a holding block across the hall from North Carolina's death chamber. He is scheduled to die by injection at 2 a.m. Friday for a 2001 Cumberland County murder and robbery.

Robinson's attorneys also filed a lawsuit against the state in Wake County Superior Court, seeking a stay so issues about the ethics of a doctor attending the execution, as required by state law, can be examined. The lawsuit was filed in conjunction with inmate James Edward Thomas, 51, who is scheduled to be executed Feb. 2 for a Wake County slaying and sexual assault he has said he doesn't remember.

Robinson's attorneys contend they have new evidence that wasn't available at their client's trial. As a child, Robinson was beaten by his alcoholic father and a resulting brain injury affected his impulse control, the attorneys said in the filing.

Lawyers for both inmates contend in the lawsuit that there is no guarantee the executions will be painless.

While state law mandates that a doctor attend executions, the North Carolina Medical Board approved an ethics policy last week that prohibits the doctor from participating in any way, even monitoring vital signs.

Central Prison Warden Marvin Polk said in an affidavit filed Monday in a federal case on lethal injection that a doctor doesn't monitor the inmate's heart rate or consciousness.

Polk said the doctor is there only to sign a death certificate, but if the doctor felt the need to intervene, the warden would stop the execution.

A nurse watches the brain wave monitor that indicates the inmate's level of consciousness, Polk said. An emergency medical technician watches the heart rate. The doctor is in the same observation room.

A group of 30 Democratic legislators have asked Gov. Mike Easley to stop all executions until a committee studied the injection method. Easley also is considering requests for executive clemency from both inmates.