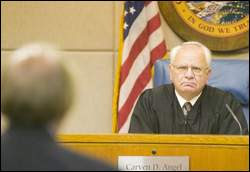 On Sunday, Angel granted Lightbourne a stay of execution until Florida of Department officials rewrite portions of Florida's execution protocol manual. The judge wants the manual to be more detailed and spell out each execution team member's job description and training, among other changes.

The ruling also means Schwab's November execution could be delayed because the DOC must change the execution protocol manual before Angel issues a final order on whether the current procedures are "cruel and unusual." More evidentiary hearings are likely to follow in Ocala as the judge, the state attorney general and defense attorneys review policy changes.

Supreme Court arguments in the Schwab and Lightbourne cases also could be delayed because justices want to review hearing transcripts and orders for the Ocala case before they hold their own hearing.

Schwab execution's is scheduled to be the first since the botched execution Angel Diaz on Dec. 13.

It took 34 minutes - twice as long as normal - for Diaz, 55, to die after an unusual second injection of the three chemicals used in the procedure. Then-Gov. Jeb Bush suspended all Florida executions in December after a medical examiner said prison officials botched the insertion of the needles.

A day after the Diaz execution, the Capital Collateral Regional Counsel's office, which represents dozens of death row inmates, filed petitions on behalf of all their clients claiming the penalty was cruel and unusual. The same day, on Dec. 14, the office handpicked the Lightbourne case to argue the issue.

On July 17, Angel told the Florida Supreme Court in an order that the Lightbourne ruling would be submitted by Sept. 10. That would have given the high court a little over a month to read transcripts of Lightbourne's hearings, Angel's order and the attorneys' written closing arguments.

But now, DOC has until Aug. 17 to file the updated manual. Five weeks after that Angel wants attorneys back in court to review and argue the changes.

Hearings for the Schwab and Lightbourne cases are scheduled in Tallahassee in October. The Schwab execution is slated for Nov. 15.

Crist said he was confident changes in lethal injection procedures adopted since the Diaz execution, including additional training, will ensure compliance with constitutional bans against cruel or unusual punishment. A new manual came out in May.

Angel thought it wasn't enough.
"Our objective is to carry out a process that is consistent with evolving notions of the decency of man. It is not going to involve unnecessary lingering or unnecessary or wanton infliction of pain or lingering death," he said.

Angel wants to leave nothing to the imagination. He wants the manual to state exactly what training and experience each person on the execution team has and spell out minimum qualifications for each person involved.

The judge doesn't think a warden is qualified to sift through resumes and choose qualified medical personnel or staff. Instead, the DOC secretary should provide a warden with a list of qualified people and the warden should choose from that list.

Angel also thinks anyone on the execution team should have the authority to speak directly with the warden about problems and have the execution stopped, and DOC should provide the governor's office with a certificate showing their execution chamber is up to date, the equipment is working and functioning properly, and the team is qualified to handle the execution.

The judge also criticized the vagueness of the executioner's training and background. Florida statutes state the executioner must be 18 and have a high school diploma.

Assistant State Attorney Rock Hooker said it's not likely DOC actually has an unexperienced or young executioner involved in the process, but said the vagueness in the executioner information is to protect the types of people involved.

"They did that intentionally," Hooker said. "They (DOC officials) didn't want to [write it out] . . . because that would narrow down the type of person that would be an executioner."

Florida statutes protect the identity of the executioner and security staff that handles executions.

"We certainly are willing to do anything we can to improve it," she said, referring to procedures. Plessinger also said the department is waiting to get the judge's written order before they rewrite the protocol.

"The judge doesn't think the protocol will produce a painless execution," Dupree told The Associated Press. "He has ordered the Department of Corrections to revise its protocols."

Kenneth Nunnelley, deputy attorney general, said Sunday the ruling could impact the Schwab execution. He declined to comment on Tuesday, and the Attorney's General press office would not comment on the issue Tuesday.

Mabel Perez may be reached at mabel.perez@starbanner.com or 867-4106.

DISCUSS THIS ARTICLE
Start or join a forum on this topic.