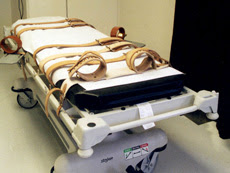 The State of Florida has a significant number of people with severe mental disabilities on death row, some of whom were disabled at the time of the offense and others of whom became seriously ill after conviction and sentence.@ ABA Report on Florida at ix.

And, while Florida has recently excluded individuals suffering from mental retardation from the death penalty, it has not extended its logic to those suffering from severe mental disabilities. Id. at xi.

The ABA assessment team recommends that the logic regarding those with mental retardation be extended to those with severe mental disabilities, noting that mental illness can effect every stage of a capital trial. Id at xxxviii.

Furthermore, even in the case of the mentally retarded, Florida has created a procedure that will produce arbitrary results, as ABA assessment team acknowledges.

The ABA assessment team also criticized the burden of proof imposed on capital defendants and recommended that the State be required to disprove a defendant`s substantial showing that he is mentally retarded. ABA Report on Florida at xxxviii.

The imposition of the burden of proof on the defendant will undoubtedly cause the decision as to who is mental retarded and does not get executed and who is not retarded and gets executed to turn on arbitrary factors, such as whether records demonstrating onset before the age of 18 exist, are family members still alive who can advise mental health experts as to the defendant=s adaptive skills, etc.

I feel those with mental disabilities ought to be well taken care of just like those also affected with drugs or other high enhancement substances.

Millions of Americans have mental disabilities. But even with those disabilities, many of them are doing remarkable things working, learning and fully participating in the lives of their families and communities. Much of this is possible through the support of groups who provide education, job training and placement, and see that their rights are protected. By offering financial support, volunteering with local organizations or becoming an advocate for those with mental disabilities.
---------------
Aiyna