Judge: No stay on Davis execution 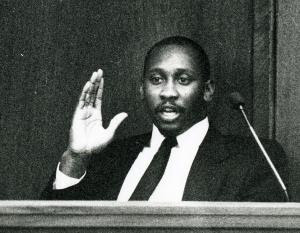 Judge: No stay on Davis execution

The twin actions leave Davis' legal team only an appeal for clemency on
Monday to block the death by lethal injection.

The session before the state Board of Pardons and Paroles in Atlanta is set
to begin at 9 a.m.

Davis is scheduled to die at the Georgia Diagnostic and Classification
Prison in Jackson at 7 p.m. Tuesday.

In her six-page order filed in court shortly after 7 p.m. Friday, Freesemann
ruled that affidavits filed by Davis' lawyers, which they said contained
"newly discovered evidence," failed to carry the legal burden in "each and
every submitted affidavit."

An extraordinary motion for a new trial sets out six specific requirements
to get court action.

Likewise, Freesemann ruled, affidavits from jurors who expressed concerns
about the case "do not form a legal basis of support for defendant's
extraordinary motion for new trial."

She denied the extraordinary motion for a new trial.

"Accordingly (the court) denied defendant's motion for a stay of execution,"
Freesemann ruled.

Instead, he will be served the same meal as all the other inmates at Jackson
- chicken with gravy on biscuits, mashed potatoes, collard greens, tossed
salad with vinegar and oil dressing, spice cake and iced tea.

The actions come as time appears to be running out for Davis, now 38, and
his nearly 16-year-long bid to overturn his Aug. 28, 1991, conviction in the
MacPhail slaying.

The victim, a 27-year-old Savannah police officer working off-duty security,
was gunned down Aug. 19, 1989, in the parking lot of the Greyhound Bus
Terminal at Oglethorpe Avenue and Fahm Street.

MacPhail was running to the aid of a man being pistol-whipped by Davis.

The jury found that Davis pulled a .38-caliber pistol from his waistband and
shot the officer once as he stood and again as he lay on the ground.

Testimony at the trial for Davis showed MacPhail's weapon was never
unholstered, its security strap never unfastened. His baton was still on his
belt.

But Monday, attorneys for Davis filed an extraordinary motion for new trial
and a request for a stay of execution.

District Attorney Spencer Lawton Jr. and his chief assistant, David Lock,
challenged the actions as being unfounded claims of new evidence filed
solely for the purpose of delaying the execution.