The latest lethal injection litigation in the Sunshine State 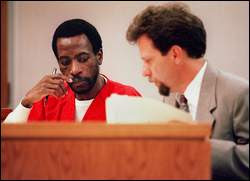 The latest lethal injection litigation in the Sunshine State

Capital Defense Weekly, as detailed here, has been keeping close watch on the latest developments in the lethal injection saga in Florida. This news story provides some of the highlights:

An Ocala judge interrupted a death penalty trial questioning whether the state's lethal injections are cruel and unusual punishment after telling the Department of Corrections its executions protocols are lacking. Fifth Circuit Court Judge Carven Angel gave the oral order to stop executions on Sunday after abruptly shutting down a week-long hearing in which lawyers for convicted killer Ian Lightbourne questioned Florida's death penalty procedures in the aftermath of the botched December execution of Angel Diaz....

[Judge] Angel, whose written order is expected to be released this afternoon, criticized the [state]'s revamped execution policy, telling lawyers that they were deficient, according to sources in the courtroom. The trial is slated to begin on Sept. 21, five weeks after corrections officials are to submit their revised protocols. The delay could also postpone the scheduled Nov. 15 execution of Mark Schwab and a Florida Supreme Court ruling on the death penalty, scheduled for oral arguments on Oct. 11 in anticipation of a resolution of the Lightbourne case.