Florida remains closer to no more executions than to the next one. 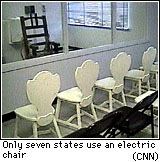 Stay of the death penalty

Florida remains closer to no more executions than to the next one.

On July 18, Gov. Crist signed the first death warrant since former Gov. Bush suspended capital punishment. In December, the Department of Corrections botched the lethal injection of Angel Diaz by injecting drugs into his soft tissue, not his veins. The usual 15-minute execution took more than twice that long. A special panel recommended procedural changes, so the state would not violate the Eighth Amendment ban on "cruel and unusual punishment."

But since medical personnel won't participate in executions, it seemed unlikely that the changes would satisfy the courts. Sure enough, last week a judge in Marion County issued a stay of execution and asked for a rewrite of the state's death-penalty protocols. The case does not involve the inmate whose death warrant the governor signed, but the judge's order may hold up all executions, including the one now scheduled for November.

Support for capital punishment nationwide has been slipping. In Florida, which leads the nation in exonerations from Death Row, more juries are handing down assured sentences of life without parole. There always will be cases that rekindle the spark for the death penalty. But then there's the difficulty of writing a law to cover all cases, and of devising a system to carry out the punishment. Florida is failing in both areas.