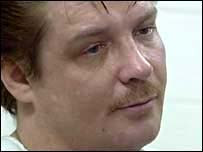 Death Row Scot Kenny Richey says he believes he will be executed or be back
home in Scotland a free man by the summer. He has been locked up 23 hours a
day, seven days a week for the last 20 years for a crime he insists he did
not commit after he was jailed for murdering a two-year-old girl.

stv was given access to Richey as he prepares to start his 21st year behind
bars.

The Mansefield Correctional Institution has a website which features a photo
gallery from Death Row. Page after chilling page of doomed faces, convicted
murderers executed by the state of Ohio. For 20 years now, Kenny Richey has
lived with the knowledge that one day he could join them. Thirteen dates for
Richey's execution have been set and postponed. Two years ago, his
conviction was finally overturned, only to be reinstated by another court.

He said: "I can't put into words what happened. I was three days from
leaving here, from going home. I had everything packed, sent home, the
works. You know, you never give up hope. As long as there's breath in your
body, you always have hope."

Asked how he keeps himself sane, under these conditions, he replied: "Deep
down, you find strength within in you that normally you never think you
have. You find a way. You find that strength."

Tomorrow, Kenny Richey starts his 21st year on Death Row. He said: "It's
just another day...Every day is just another day. It shouldn't have gone on
this long but it has. It's the American way of life, I guess. Justice is
paid for like a commodity in this country. You have the money, you can get
justice. You don't, you're pretty much screwed."

For a few hours each day, he mingles with other prisoners. The rest of the
time, he is locked up in his cell, measuring 8 feet by 12. He explained:
"Want to know what it's like? Lock yourself in a bathroom for 24 hours. Have
somebody gie you a tray of food. Try it for a week in fact, 24 hours won't
do it. Lock yourself in a bathroom for a whole week; you can't leave it.
Fifty two weeks, for 20 years. That's what it's like. Drives most people
nuts. Of course, most people say I am nuts."

Somehow, he has retained a sense of humour. Asked what he can find to laugh
at there, he replied: "You laugh at everything you can. If you're no
laughing, you're crying. So you'd best be laughing. Physically I'm not too
good. I'm about 40lb overweight. I'm a fatpot. I've had two heart attacks.
My eyes are black; don't know why. Don't know how I'll get rid of that.
Overall health... I'm not too good. But I'm hoping I'll live long enough to
get out of here."

Richey was convicted of murdering two-year-old Cynthia Collins by setting
fire to the apartment block where she lived. The prosecution alleged he was
trying to get revenge on an ex-girlfriend. He has always denied it, and this
week the court heard the latest stage of his appeal. His lawyers say the
forensic evidence against him 20 years ago was fatally flawed. The fire was
an accident. The state argues that the forensics were just one part of a
compelling circumstantial case.

Richey says that if he loses now, there will be no point launching yet
another appeal. "The US supreme court has just refused to look at it. So
it'll be..."

But recent elections have given him some hope. Ohio has a new governor, a
democrat who has already stayed three executions and, as our interview drew
to a close, he revealed he has allowed himself to believe he could win
again.

He said: "I believe I'll be home this year. Hoping by August. I miss just
walking around the streets. That's one of the things I think I'll do when I
get out. Go on a long walk around Edinburgh."

Kenny Richey is now one of the longest serving prisoners on Ohio's death
row. But the legal process that will decide his fate will not go on forever.
Sooner or later, the state's courts and governor will decide whether his
new-found optimism is justified.