Health care professionals ought not participate in executions 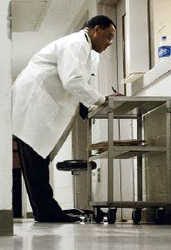 A bigger fight----Health care professionals ought not participate in
executions, and that ban should extend to this state's nurses


Some North Carolina nurses are engaged in an effort to persuade their
regulatory board, the N.C. Board of Nursing, to establish an ethics policy
that would ban nurses from participating in executions. Good for them.
These nurses are joining a fray now in full swing in the state over just
what health care professionals can and cannot do when it comes to
executions. The N.C. Medical Board, which oversees doctors, already has
passed a policy that prohibits doctors from doing anything more than being
present at an execution.

Meantime, the state is in effect under a moratorium regarding the death
penalty because of legal questions about whether lethal injection
constitutes potentially cruel and unusual punishment. If that were found
to be the case, that method of execution would be deemed unconstitutional.
Nonetheless, legislators ought to go ahead and make the moratorium a fact
of law, if they have the courage to do so.

Nurses are professionals, and they take the work of soothing and saving
lives seriously. They should not be asked to help take lives, period. It
may be that, although current law doesn't require that a nurse be present
at an execution, those nurses pushing the ban fear what will happen if
doctors successfully resist participating in executions in a clear and
absolute way. Will prison officials and pro-death penalty politicians then
turn to them to read brain-wave monitors and the like to see whether an
inmate being executed is unconscious before the administering of lethal
drugs?

One nurse who supports the ethics policy to prevent nurses' participation
in executions is Sue Guptill of Durham. She makes the entirely valid point
that nurses simply aren't trained in this specific duty: And that doesn't
even broach the issue of whether a health-care professional, no matter how
well trained, ought to take part in depriving somebody, even a duly
sentenced murderer, of his life.

Yet, in the legislature and in the minds of some prison officials, there
has to be a way to get health professionals involved in the process. It's
simply an unreasonable objective, and one that can't be reconciled with
the ethics of these professions. The N.C. Board of Nursing, which
determines ethical guidelines, should act without fear of political
ramifications in passing a prohibition on nurses being engaged in any way
in the carrying out of the death penalty.

And then, somehow, let's hope for a political leader who will have the
guts to tell lawmakers, be they his or her colleagues or not, that it's
time North Carolina's death penalty was retired. Once carried out, it
can't be corrected, no matter what miscarriage of justice may come to
light. There already have been cases of inmates taken off death row
because of new evidence, or because their trials were found to have been
flawed.

No sane society would say, "Well, if we kill someone now and then who's
not guilty, that's just the price we pay." Society wouldn't pay that price
-- an innocent man or woman would. That is an intolerable breach of all
that justice is supposed to be about.