They were warned in appeal after appeal 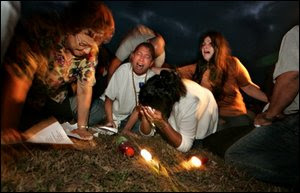 What do they mean, they "could not have considered [the] series of events" that occurred in the Diaz execution, until they had happened?

Is this because they cannot legally consider a scenario of an execution going wrong until has has actually gone wrong in the exact way that defense counsel has warned it might?

It makes no sense -- they were warned in appeal after appeal that there were potential problems with the chemicals (the fact that veterinarians cannot use those chemicals to humanely end the lives of pets ought to have put hem on notice.)

They were warned that there were potential problems with the technical set-up (and lots of botched executions documented nation-wide.)

They knew that the DOC had changed the procedure, which they'd never do on their own volition had there not been some kind of a problem along the way.

So why couldn't they consider it until now?

If the FSC should not be the institution tasked with the responsibility of being the checks-and-balances to the FL lethal injection procedure, just who the fuck should?

motion for postconviction relief and a denial of a request for additional public records.

circuit court pursuant to this Court's December 14, 2006, relinquishment order in

Lightbourne's conviction and death sentence were affirmed by this Court in

recent motion, filed in February 2006, Lightbourne alleged that his rights under the

contact the Bahamian consulate or notify the consulate of his detention and arrest. He

related to this claim.

As to his claim under the Vienna Convention, we affirm the denial of relief

affirm the summary denial by the trial court based on our decision in Diaz v. State,

Lightbourne in his February 2006 motion. However, as a result of Angel Diaz's

execution by lethal injection, a series of events occurred that the trial court could not

have considered in denying Lightbourne's motion. The impact of those events on the

Lightbourne v. McCollum, SC06-2391. Accordingly, we conclude that the better

course is to allow that case to proceed, in which Lightbourne has reasserted his public

records request and in which an evidentiary hearing will be held in May 2007.