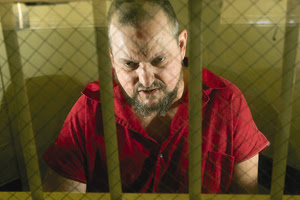 Crime: Some medical groups are trying to stop physicians from assisting in legal executions, putting the death penalty on hold in several states Jamie Dean

Allen Holman wants to die. The 47-year-old death row inmate admits how he murdered his estranged wife, Linda Holman, on July 28, 1997: After chasing her down at a high speed, and ramming her car from behind, Holman gunned down his wife of seven years in a convenience store parking lot in front of a police officer.

A North Carolina jury sentenced Holman to death in 1998. Since then, he has dropped his appeals, fired his lawyers, and repeatedly asked the state to impose his death sentence.
Officials were poised to oblige on March 9, but a Wake County judge delayed Holman's execution, citing a tangled conundrum: State protocol for executions requires a doctor to monitor a condemned inmate's vital signs, but the state's medical board says it will discipline any doctor who does so, calling physician participation in executions unethical.

Holman was perplexed: "Why do they have a problem? They [doctors] perform abortions, murder babies all the time," he told the Associated Press. "They all of a sudden got a conscience about their Hippocratic oath."

North Carolina is one of 13 states where the death penalty is now on hold. In at least 11 of those states, judges cite concerns over the use of lethal injection. Some say that inmates could endure extreme pain if personnel administer the chemicals improperly. Though doctors sometimes mix or administer the drugs, prison officials often use nurses or non-medical personnel for the job. (At least 17 states require that a physician be present at executions, though required participation is usually limited to declaring an inmate's death.)

Meanwhile, the controversy over lethal injection has fostered a controversy over the role of physicians in executions: While some judges are calling for an expanded role for doctors to ensure that inmates don't unduly suffer, some medical groups and individual physicians are calling on doctors to refuse to participate in legal executions. In some cases, doctors may face legal action if they don't comply.

The American Medical Association's (AMA) code of ethics insists that it is unethical for a physician to participate in an execution. The code broadly defines participation to include everything from administering an injection to monitoring vital signs. Though the AMA's code is not legally binding on physicians, many closely adhere to its guidelines.

That was evident when Missouri state officials sent letters last year to 298 certified anesthesiologists, asking for technical oversight at the execution of death row inmate Michael Taylor. No one volunteered.

Since a judge had ordered that a certified anesthesiologist be present at the execution (after discovering that a dyslexic surgeon had improperly mixed chemicals for lethal injections in the past), Taylor's execution was stayed. The death penalty remains on hold in Missouri, and Taylor remains on death row for the 1989 kidnapping, raping, and killing of a 15-year-old girl he abducted while she waited for a school bus. Taylor pleaded guilty to the crime.

A similar scenario unfolded in California last year when a federal judge ordered that anesthesiologists be present at the execution of Michael Morales, an inmate convicted of raping and killing a 17-year-old girl. Two doctors volunteered, but later backed out, and Morales' execution was stayed. The death penalty is still under review in California.

The issue took a pointed turn in North Carolina earlier this year when the state's medical board said it would discipline any physician who participates in an execution. That position conflicts with the state's execution protocol, which requires that a doctor monitor an inmate's vital signs. North Carolina's medical board is the first in the country to threaten such punishment. The quandary has halted five executions in the state.

North Carolina Medical Board attorney Todd Brosius told WORLD that the agency adopted the position after several physicians inquired about the board's policy regarding doctors' participation in executions. The written policy statement notes that the board is endorsing AMA standards.

When WORLD asked Brosius if there are any other legal activities that the board prohibits physicians from engaging in, he replied: "Not that I'm aware of."

Michael Rushford calls that "a double standard." Rushford is the president of the Criminal Justice Legal Foundation, a California-based, public-interest law organization that advocates for victims rights in cases around the country. Rushford notes that plenty of physicians carry out abortions, which are controversial, but legal. "Why can't they do this?" he says of physicians participating in legal executions.

Though Rushford says physicians should be able to participate in executions, he also says lethal injection will continue to generate controversy as long as it remains the preferred method of execution since it is "quasi-medical" and sometimes complicated. He supports finding a new method: "I think science could come up with better ways."

In the meantime, the North Carolina Department of Corrections is suing the North Carolina Medical Board, asking a judge to prohibit the agency from disciplining doctors who participate in executions. Berger, who speculates that the case will take at least two years to resolve, has also introduced a bill in the North Carolina legislature that would protect physicians. So far, the bill hasn't made it out of committee.

Legislatures in Oklahoma and Georgia already have passed similar laws to protect physicians. Lawmakers in Georgia passed their bill in response to out-of-state physicians who attempted to force the state's medical board to punish doctors who helped the state carry out lethal injections. The board refused, and the plaintiffs are now suing the board.

While physicians across the country await the outcome of these cases, another group waits as well: victims' families. Rushford says he regularly hears from victims' families who have been waiting for years for executions to be carried out. They need closure, he says: "For them, it's torture."
Posted by Serena at 10:58