Ban on executing retarded is tested 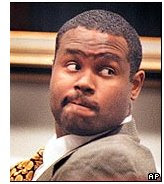 Virginia case shows issue’s complexity
By David G. Savage Los Angeles Times
YORKTOWN, Va. – Five years after the Supreme Court declared in Atkins v. Virginia that the death penalty is unconstitutional for people with mental retardation, Daryl Atkins still sits on death row.
In August, lawyers for the man who won the landmark ruling will try again to convince a Virginia jury that he indeed has mental retardation and therefore deserves a life term in prison, not execution.
Three times before, the county prosecutor has persuaded juries to condemn Atkins to die, and she expects to win a fourth time.
“Daryl was a slow reader. He was lazy, and he came to school stoned. But until he committed this murder, no one thought he was mentally retarded,” said Eileen Addison, the prosecutor.
His case is not unique. Although the high court found that there was a “national consensus” against executing people with mental retardation, it left it to the states to decide which murderers would qualify for that exemption.
Determined prosecutors have had little trouble convincing juries that a convicted killer with a low IQ is not necessarily retarded. The definition of retardation is imprecise; test results can vary, giving prosecutors an opportunity to produce additional scores and other evidence to make the case that an inmate is smart enough to die.
The result is that the Supreme Court’s ruling has had less effect than many had foreseen.
“There has been more resistance than I expected,” said University of New Mexico law professor James Ellis, an expert on mental retardation who represented Atkins in the Supreme Court.
A few states moved off death row several inmates who had IQ scores in the 60s or low 70s, he said. But states where capital punishment has strong support, including Virginia and Texas, have let juries decide. And “it’s an uphill fight with the jury” to establish mental retardation, Ellis said.
In 2002, he told the high court there were no reliable numbers on how many of the nation’s more than 3,000 death-row inmates were mentally retarded. Some experts predicted several dozen inmates would qualify for the exemption. Human Rights Watch said the number could be as high as 300.
Since then, said Richard Dieter, executive director of the Death Penalty Information Center in Washington, only a handful of inmates Dieter knows of have been found to have mental retardation and had their death sentences commuted.
The Atkins decision “has had an effect, but not a sweeping effect,” said Dieter, whose center opposes capital punishment. “His case is emblematic because in a lot of states it has resulted in case-by-case litigation.”
The greatest effect of the court’s ruling may have been in cases that followed. Some prosecutors probably chose not to seek the death penalty when a murder suspect had low IQ scores, legal experts said.
Historically, the law has exempted from criminal punishment people who are mentally ill. If they were disturbed or delusional when they committed the crime, they presumably could not understand the consequences of their acts and therefore would not be considered legally responsible.
People with mild mental retardation are judged to be competent to stand trial. They presumably understand when they have done wrong. They “should be tried and punished when they commit crimes,” Justice John Paul Stevens said in the Atkins decision.
“Because of their disabilities in areas of reasoning, judgment and control of their impulses, however, they do not act with the level of moral culpability” that puts them among the small group of the worst offenders who deserve to die, he said.
In 2005, 12 jurors agreed with Atkins’ prosecutors and said he did not qualify as retarded. A year later, however, the Virginia Supreme Court said the judge had erred by informing jurors that Atkins had been sentenced to death previously.
This decision set the stage for still another trial this summer in the same courthouse.
”It’s been five years, but this issue is far from being resolved,“ said Dieter, of the Death Penalty Center. ”It’s been a battle of wills, and no one is conceding.“
Posted by Serena at 07:41