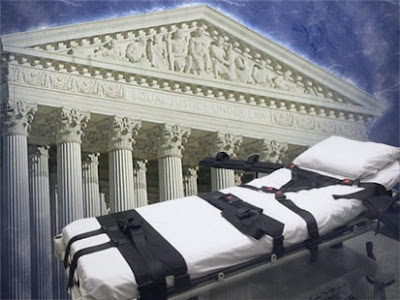 An international court ruled today that the U.S. government must take
steps to ensure that five Mexican nationals aren't put to death
pending its decision in a suit that challenges the application of the
death penalty in murder cases where defendants weren't told they had
the right to request consular assistance.

Here's an excerpt from the International Court of Justice decision:

The United States of America shall take all measures necessary to
ensure that Messrs. José Ernesto Medellín Rojas, César Roberto Fierro
Reyna, Rubén Ramírez Cárdenas, Humberto Leal García, and Roberto
Moreno Ramos are not executed pending judgment on the Request for
interpretation submitted by the United Mexican States, unless and
until these five Mexican nationals receive review and reconsideration
consistent with paragraphs 138 to 141 of the Court’s Judgment
delivered on 31 March 2004 in the case concerning Avena and Other
Mexican Nationals (Mexico v. United States of America);
The Associated Press says one of the 51 Mexican prisoners was
scheduled to be executed in less than three weeks.

The next step isn't clear, as the Supreme Court ruled earlier this
year that President Bush doesn't have the authority to order state
governments to comply with edicts from the World Court.