Lethal injection at heart of debate 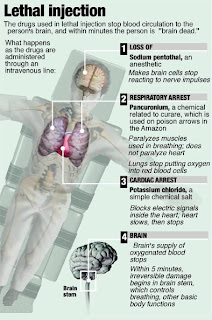 BY ROB HOTAKAINEN
Eagle Washington bureau
Murderer and baby snatcher that she is, Lisa Montgomery will not face execution anytime soon.

The Kansas woman is only freshly convicted of strangling and slicing open Bobby Jo Stinnett, and Assistant U.S. Attorney Matt Whitworth predicted: "It'll be many years before it's all wrapped up."

Even in Texas, which has led the nation with 405 executions since 1976, they've just postponed the Feb. 26 death date for Derrick Sonnier.

He raped and murdered a woman and then stabbed her 2-year-old son to death. That was back in 1991.

"We're just not going to go forward with execution dates, although we're still trying cases as death penalty cases," said Assistant District Attorney Roe Wilson of Harris County, which includes Houston and accounts for a quarter of Texas executions. Kansas also continues to try death penalty cases, even though the state has not executed a prisoner since 1965.

On Nov. 1, a jury handed down the death penalty for Scott Cheever in the death of Greenwood County Sheriff Matt Samuels.

Across the country, the capital punishment machine clearly went into idle Oct. 30, when a majority of the U.S. Supreme Court blocked the execution of a Mississippi man who killed 20 years ago. The stay, which came after his supposed last meal of barbecued pork chops but 19 minutes before the lethal drip was to be opened, sent a signal to judges, prosecutors and prison officials in more than three dozen states that accept capital punishment.

The court would not sanction any more appealed executions until the question is settled: Can the drugs used in lethal injections cause cruel and unusual punishment?

The Mississippi case, which involved the fatal beating of a 56-year-old woman who had just been at church choir practice, was the third such stay since the justices decided in September to consider the Kentucky case, Baze v. Rees, which will be argued in January.

Lethal injections have been used in 85 percent of the 1,099 executions since 1976. The others were electrocution (14 percent) and gas chamber (1 percent), while three prisoners were hanged and two were killed by firing squads.

Thirty-eight states have the death penalty on the books, but New York's law was declared unconstitutional with one man still on death row. Of the remaining 37, all but one uses injection. Nebraska uses the electric chair.

"We should take advantage of this apparent pause in executions to consider the severe injustices within the system as a whole," said U.S. Sen. Russ Feingold, D-Wis., who has introduced a bill called the Federal Death Penalty Abolition Act.

A pause in executions

Whitworth, who convinced a jury in Kansas City, Mo., that Montgomery should die, expects executions to get back on track after the Supreme Court decision next year.

Proponents of the process note that none of the cases before the court question the constitutionality of capital punishment -- unlike in 1972, when the court scrapped the death penalty laws, but accepted a reformed system four years later.

Only the protocols, or how the drugs are combined, for lethal injection are at issue at the moment, not its constitutionality.

Last year, the U.S. Supreme Court, dealing with trial arguments, not lethal injection, upheld the constitutionality of the Kansas death penalty, which was reinstated in 1994. The state has 10 prisoners on death row; the most recent is Cheever.

Daniel Medwed , a law professor at the University of Utah, predicted that death penalty opponents will gain more traction if the Supreme Court concludes that lethal injections are cruel and unusual punishment.

"Lethal injections have been in vogue for a long time," Medwed said. "What makes this unusual is that the most popular and prominent method of execution is being attacked. The interesting thing will be to see if the Supreme Court finds it cruel and unusual, what's left? What are states going to do?... Some people think, in Utah at least, that the firing squad is the most humane because it's just one bullet to the head -- it's quick."
Posted by carie at 07:40