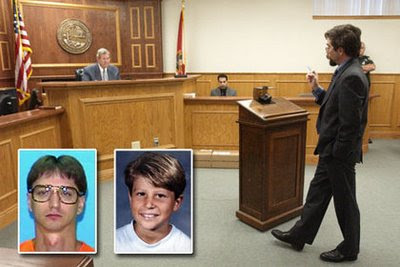 His execution marks Florida's first state killing since the U.S. Supreme Court ruled in April that the commonly used, three-drug lethal cocktail is not cruel and unusual punishment under the U.S. Constitution.

That ruling ended a de facto moratorium on the death penalty that had swept the nation while the high court focused on the issue.

Since the ruling, nine condemned men have been put to death across the country -- far fewer than the "bloodbath" death-penalty opponents had feared would follow the decision.

Now, eyes shift to Florida on Tuesday, when Schwab, barring any last minute legal moves, will become the 10th man to die since the ruling.

"There is no question of his guilt, and the law says [lethal injection] is an appropriate punishment," said Wayne Holmes, a Seminole-Brevard assistant state attorney and prosecutor on the initial Schwab case.

Junny's parents, Vicki and Braulio "Junny" Rios-Martinez, could not be reached for comment.

For the past 16 years, Schwab has lived in a 6-by-9-foot cell in Florida State Prison in Starke. He joined death row in 1992 after he was convicted of killing Junny, a little boy who loved surfing and baseball.

On April 18, 1991, Schwab called the 11-year-old's school and identified himself as the boy's father. He left a message for Junny to go to a baseball field after school. Witnesses said they saw Junny get into a U-Haul with Schwab.

Five days later, Schwab led investigators to the boy's body, which he hid inside a footlocker in a palmetto thicket in Canaveral Groves, north of Cocoa.

Schwab was originally scheduled to die by lethal injection Nov. 15. The U.S. Supreme Court issued a last-minute stay that postponed the execution while it considered the lethal-injection issue in a case that originated in Kentucky.

Some had hoped the top court's decision would quash many of the legal challenges to lethal injection. But the closely watched ruling did little to settle the debate, and some say it has actually sparked more on the issue.

"It's really started the ball rolling," said Deborah Denno, a law professor at Fordham University and a death-penalty expert. The U.S. Supreme Court "hasn't changed things that much, but there is a more heated discussion," she said.

Some states -- such as Georgia and Texas -- are moving forward with executions this year. Texas has 16 scheduled to die before the end of the year.

Others -- such as Ohio and Delaware -- are examining the way they carry out capital punishment. Last month, a judge in Ohio became the first in the country to order authorities to stop using the three-drug cocktail and opt for a single, large dose of barbiturate, which is often used in animal euthanasia.

"This may have reverberations in other states," said Ty Alper, associate director of the death penalty clinic at the University of California Berkeley school of law.

It doesn't appear that Florida is headed toward the one-dose process yet.

Last year, Florida enacted new and detailed procedures for how to administer the three-drug cocktail after convicted-killer Angel Nieves Diaz needed a second dose of the fatal chemicals and took 34 minutes to die in 2006.

The state responded by requiring more staff training and better monitoring of proceedings in the death chamber.

Schwab will be the first condemned prisoner to enter the chamber since Diaz. There are no other executions scheduled in Florida. But there are 377 Florida prisoners waiting on death row.


Out of options
In 1992, Mark Dean Schwab was sentenced to death in the 1991 slaying of Junny Rios-Martinez, but the execution was delayed by appeals. On Nov. 14, Schwab's execution was delayed until the U.S. Supreme Court decided whether lethal injection is constitutional. In April, the court ruled it is, and in May, Gov. Charlie Crist ordered that Schwab be executed.