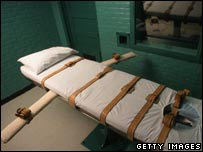 Three weeks after the Supreme Court held a hearing on constitutional issues surrounding the lethal injection method of execution for murder, the Justices are expected to be asked later Wednesday whether to keep intact an informal but functional bar to such executions until a ruling is issued in the test case. Alabama legal sources said that attorneys for James Callahan, facing execution in that state at 6 p.m. Thursday, were preparing an application seeking to postpone the execution.

The Court has not permitted an execution to occur since shortly after it agreed to examine the lethal injection method in an order on Sept. 25.

U.S. District Judge W. Keith Watkins of Montgomery on Dec. 14 barred Callahan’s execution, concluding that it “would be a waste of judicial resources” if the Court were to go ahead and rule on the constitutionality of Alabama’s version of the three-drug execution protocol until the Supreme Court has ruled in the case of Baze v. Kentucky (07-5439) — argued Jan. 7 in the Supreme Court. Thus, Judge Watkins opted for a stay. While he said that Callahan might prevail in a challenge to Alabama’s method under one theory, the judge was reluctant to decide the pending challenge on that basis while the Baze decision is awaited. That was the key factor in his decision to postpone the scheduled execution. The judge’s 10-page opinion can be downloaded here.

On Tuesday, however, the 11th Circuit Court, in a 2-1 ruling, lifted Judge Watkins’ order, clearing the way for the Thursday execution to proceed. Without examining Callahan’s challenge to Alabama’s execution formula, the majority found that he had filed his challenge too late. Callahan, the majority said, shoujld have begun his challenge before July 31, 2004 — two years after he first selected lethal injection as the method of his execution. “In light of the fact Callahan’s complaint was filed more than two years beyond the limitations period, the district court abused its discretion by entering a stay of execution. We now vacate that decision.” The Circuit Court’s 24-page opinion (which includes the dissent) can be downloaded here.

Callahan was sentenced to death in 1982 for the murder of a Jacksonville State University student, Rebecca Suzanne Howell, after kidnapping her at a landromat in Jacksonville, Ala. She was raped and murdered, and her body was dumped in Tallaseehatchee Creek. His conviction and death sentence became final on Oct. 1, 1990.

After other challenges in his case failed, he filed a civil rights lawsuit Oct. 11, 2006, claiming that Alabama’s lethal injection method of execution was unconstitutional under the Eighth Amendment. The trial of that lawsuit was due to begin in September of last year, but the state began a new review of the protocol. Judge Watkins, who also noted that the Supreme Court had agreed to hear the Baze case, decided to postpone the trial.

The state issued a revised protocol last Oct. 26, and the state Supreme Court then set Callahan’s execution for Jan. 31. That was when Callahan began pursuing a delay.