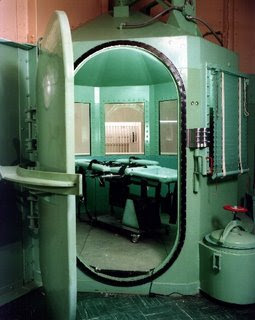 When death row inmates are subjected to degrading and grossly unjust
treatment, the rest of us ought to pay close attention, whether we subscribe
to Mathew:40 or not: "Inasmuch as ye have done it unto one of the least of
these my brethren, ye have done it unto me." Prisons officials are public
officials, acting on our behalf, presumably for our benefit. If through our
inattention or neglect we license prison officials to mistreat
prisoners-some of the most helpless, abject souls among us-we license public
officials to treat the public at large with contempt.

In its broad outline, Steve and Anthony's story, which I first began to tell
in January 2006 (see "Why are They Rounding Up Tookie Williams' Friends?"),
is straightforward. A few days prior to William's execution on December 13,
2005, they along with several other inmates were rounded up and detained in
the Adjustment Center, San Quentin death row's "hole," on charges they had
conspired to retaliate against prison officials for their friend's
execution. For the past twenty months, they have been held there in stark
cells on property control and with no phone privileges. From day one, both
men have vehemently denied involvement in any kind of conspiracy. Indeed,
judging by their many and varied writings, both have long-since transcended
their violent gang pasts, explicitly repudiating, as did their friend Tookie
Williams, the sorts of values, beliefs, and behaviors that fuel gangs and
destroy communities. Both men, however, are award-winning prison writers and
outspoken critics of San Quentin and the prison industrial complex in
general. And therein lies the rub.

As I reprise their never-ending story, over a year and a half in now, the
question of credibility looms large. Why should I, much less anyone else,
believe two condemned men, two people who have nothing to lose by lying,
and, perhaps, something to gain in the form of winning the sympathies of
supporters and drawing the attention of prison critics.

But the same kind of logic can be used to establish the credibility of our
informants. Unlike many of us living "free," they have nothing to lose-jobs
or social standing-by telling the bald truth. In a recent letter to me,
Anthony Ross notes: "We have nothing to hide, which is more than I can say
about them."

As with any institution, the more corrupt a prison, the greater its stake in
polishing its image, preserving it legitimacy, and squelching stories that
subvert the official one it tells the public about itself. And near-absolute
power, of the kind prison officials hold over death row inmates, can too
easily, through all manner of manipulation, cripple the people who would
tell subversive stories. If you think corporate whistler blowers take risks,
imagine blowing the whistle from inside a death row prison cell.

In becoming well-read, self-reflective thinkers and accomplished writers
while in the hell of death row, these two men, like Tookie Williams himself,
have symbolically defeated the system designed to dehumanize and,
ultimately, to destroy them. Through their essays, stories, and poems, they
have vehemently insisted on their humanity and steadfastly maintained their
dignity. Such self-redemptive effort undermines the familiar and necessary
assumption that men sentenced to death have, by their own conduct, forfeited
their humanity-have become, as is often suggested, "animals." And we can
kill animals, so the magical thinking goes, without becoming animals
ourselves. If we can kill them with impunity, all the more reason we can
mistreat them in the meantime. Who will care? Who will defend them? People
for the Ethical Treatment of Animals?

The human voices of Ross and Champion put the whole inhumane, barbaric
American killing apparatus on trial, and such a reversal cannot stand.

The darkly ironic truth revealed by Steve and Anthony's interminable ordeal
is that San Quentin officials themselves are the ones conspiring to
retaliate-against the late Tookie Williams and his friends! For what? For
liberating themselves and for expressing their humanity in writing-while
still in confinement on America's morally bankrupt death row.

Of course, the ins and outs of the tale are complicated, involving false
charges, time-devouring grievance procedures, published articles, various
letters and documents, and lots of bone crushing time in the hole for
Anthony and Steve. The opaque complexity of disciplinary procedures and
appeals in prison is itself very often strategic, yet another way to punish
inmates and confound transparency and accountability. Who on the outside can
possibly stay abreast of internal prison proceedings? Who can possibly bear
witness?

On occasion, however, moments of clarity present themselves, and Anthony
Ross has seized upon one of these as the occasion for the following article,
which I quote below in its entirety. I received this article and a copy of
the document Ross refers to (Form # CDC-128-B (4-74)) on August 28, 2007.
Although I cannot reproduce the California Department of Corrections and
Rehabilitation (CDCR) document here, I can attest to its prima facie
authenticity and official form and format.

Writing Under Fire: Resisting the Regime
by Anthony Ross

"Neither hegemony nor power can determine truth."

In May 2007, my brother Steve Champion and I co-authored an articled
entitled "The Paradigm of Abuse: San Quentin's Adjustment Center Revisited,"
which was published in The San Francisco Bay View newspaper. In this
article, we mention George Jackson to illustrate the stark similarities
between the hostile environment of the Adjustment Center (AC) in 1971 and
the hostile environment of the AC in 2007. This comparison was based on
factual events and personal experience and is demonstrative of both eras.
Now we have received a CDCR 128 Report that targets us for investigation
into gang activity. According to the report, the basis for this is our use
of the word "comrade" in relation to George Jackson. According to Agent T.
De La Rosa, this constitutes gang sympathy or association, and anyone who
uses the term "comrade" (a name descriptive of George Jackson) must be, ipso
facto, a gang member.

This notion of a priori culpability, whereby one's very philosophy, ideas,
or character renders them criminal, suggests an insidious and racist mindset
within the CDCR. Yet such flights of myopic thinking are common features of
a system wherein humanity and justice have been supplanted by degrading
abuse and repressive prison policies [see the Bay View article mentioned
above].

I am reminded of the weeks and days leading up to the execution of our
brother Stanley Tookie Williams. San Quentin Spokesman Vernell Crittenden
went on a virulent smear campaign to paint Tookie as an active gang member,
offering no proof and despite the fact that Tookie had been cleared of any
gang association by the former Warden, Jennie S. Woodford. Then, of course,
in his statement justifying his denial of clemency, Governor Arnold
Schwarzenegger argued that since Tookie had mentioned Malcolm X, Assata
Shukur, George Jackson, and Geronimo Pratt in his book on prison life, Life
in Prison, he could not have redeemed himself.

This pattern of criminalizing and vilifying black leaders and personages is
an old one. And some San Quentin officials are taking this practice a step
farther by making the mere mention of a name a gang offense. This bizarre
leap of flawed logic provides them with an erroneous catalyst for action
against us. It sets in motion a malicious process that can disrupt our mail,
personal property, visits, and trust account-indefinitel

There is a real and present danger here. This intentional misreading of
language makes it possible to write up any prisoner who elects to use
certain appellations in his writings, such as comrade, chairman, minister,
brother, homeboy, etc.

The retaliatory targeting of prison writers has a clear objective: to
intimidate and discourage those voices willing to expose violations of basic
human rights and degrading conditions in prison. If successful, this
strategy becomes an unwritten policy for censorship and will eventually
leave only one version, one interpretation, of life in the CDCR-that of the
CDCR!

It is worth noting that our Bay View article consisted of over 1,300 words,
yet only three-"comrade George Jackson"-were plucked from their context and
reinterpreted as something criminal or, worse, seditious. Agent T. De La
Rosa's semantic alchemy defies the criteria for gang activity as defined in
the CDCR rules and regulations, as well as the standard set forth in the
1994 case Castillo v. Alameida, Jr. [No. 94-2974], which establish specific
guidelines for gang identification. The use of the word "comrade" is not
included in either of these sources.

It is a relatively easy matter to persecute us. There is no real redress
here. The inmate appeal process is controlled by the very people who violate
policy and abuse prisoners. Now, the intent is to silence truth.

P.S. During a unit search on July 11, 2007, all of my writing paper was
confiscated and all of Steve Champion's reference books were taken. We were
never given a reason for this. We believe it was a blatant attempt to
disrupt the writing projects we are currently working on. Since December
2005, we have been isolated in the Adjustment Center on the bogus allegation
of conspiracy to assault staff in the wake of Stanley Tookie Williams'
execution. We are in an on-going legal battle to fight this false charge and
regain our dignity and the very modest "privileges" afforded to death row
prisoners. To these ends, we are seeking legal assistance and/or monetary
donations [see contact information at the end of this article].

When we consider how hard it is to confront the deceptions and lies of this
country's leaders, including Bush, Cheney, Libby, Gonzales and others, we
can only imagine the daunting challenge faced by death row prisoners
confronting deceptions and lies perpetrated by their keepers. There are no
meaningful checks and balances. And with the exception of some mainstream,
highly sensationalized and largely pro-prison, media depictions of life
inside our prison industrial complex, the system, as a whole and in its
parts, remains a closed book-a black hole in a putatively open society.

As their editor and long-time correspondent, I am convinced that Steve
Champion and Anthony Ross, with no help from San Quentin, have in their
twenty-five years on death row made themselves over. They have evolved from
young, admittedly violent gang members into mature, thoughtful men who have
reflected long and hard on their past lives and on their present
circumstances as black men on death row in America. Although they might,
like most of us, defend themselves if attacked, both have become strong
advocates of non-violent remedies to personal and political problems. They
have become writers who can tell the stories of their transformation and
defend themselves against degrading treatment and excessively punitive
prison policies, and for this they have been buried alive on death row.

You can write either man to express your concern or offer support at these
addresses:

Source : CounterPunch (Tom Kerr is Associate Professor of Writing and
Rhetoric and Ithaca College. You can email him at tkerr@ithaca.edu.)