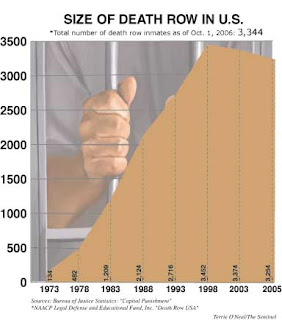 Abdul-Salaam spends his days waiting to die inside the State Correctional Institute-Greene in Waynesburg, the state's “supermax” facility for its most dangerous criminals.

Most likely he will die of old age rather than his prescribed lethal injection.

Then the appeals phase began. More than a decade has passed and the Cumberland County District Attorney's Office is still retrying aspects of the Abdul-Salaam case.

First Assistant District Attorney Jaime Keating recently spent two days in court as Abdul-Salaam's attorneys requested testing of the steering wheel of the vehicle he used to flee from the crime scene.

“I think the public needs to know that 12, 13, 15 years down the road, we're still actively litigating these cases,” says Cumberland County District Attorney David Freed. “We need to continue to pursue it because I believe all of these (death penalty) verdicts were fair.”

Pennsylvania is one of 40 states with the death penalty. The federal government and military also can execute prisoners. The remaining 12 states and the District of Columbia have maximum sentences of life.

For all practical purposes, Pennsylvania's death penalty is a life sentence - just one with an endless stream of appeal hearings and rehashing of the facts.

Since the death penalty was reinstated in 1976, Pennsylvania has executed three people. Leon Moser and Keith Zettlemoyer were executed in 1995. Philadelphia torture-killer Gary Heidnik was put to death in 1999.

All three voluntarily gave up all appeals.

“That would lead one to believe that every other death penalty case has been so fraught with error that the penalty couldn't be carried out and I don't think that's true,” Freed says.

The current version of the state's death penalty law was drafted by the Legislature in 1978 and has been upheld in several appeals to the U.S. Supreme Court.

State Rep. Will Gabig, R-199, says there is little that lawmakers can do to streamline the death penalty process as most of the appeals are at the federal level.

“We haven't heard that the statute is preventing people from being executed,” he says.

Responding to a robbery at D&S Coins in the 200 block of Fourth Street, Cole was handcuffing Abdul-Salaam's accomplice, Lynnwood Anderson, in front of the coin shop when Abdul-Salaam charged toward the officer and shot him twice at close range.

The criminals scrambled into their nearby vehicle and headed into Harrisburg. Cole was struck once in the chest and once in the arm. A nearby shop owner testified during Abdul-Salaam's trial that he called 911 and returned to find Cole lying in the middle of the street “gurgling” and his “eyes were rolling.”

The killers and their vehicle were later apprehended in Harrisburg. A jury sentenced Abdul-Salaam to death, while Anderson received life in prison. Once the appeal process started, the federal Philadelphia Defender's Association eventually took over Abdul-Salaam's defense.

“You have this federal defenders group and they're well-funded and well-compensated and this is all they do,” Freed says. “It becomes a taxing situation on our county DA's office.”

The first level of appeal is to the state Supreme Court, usually handled by the defendant's trial counsel. After the Supreme Court, capital cases return to the county courts for Post Conviction Relief Act (PCRA) appeals.

Not surprisingly, both sets of lawyers see the Abdul-Salaam case differently.

To Freed, the defense attorney's group has a single-minded goal - keeping their clients alive - and a full bag of tricks to accomplish that goal. For example, Abdul-Salaam's attorneys came into Cumberland County and “dropped a rash of subpoenas” on people, some only remotely connected to the case.

“As it turns out, many of them hadn't even been interviewed beforehand to determine what they would say,” Freed says incredulously. “There's this rash of subpoenas thrown against the wall to see what would stick.”

“You have two instances where exculpatory evidence was withheld from the defense... and that's just not the way it's supposed to go,” he says. “Had this material been turned over in the first place, we wouldn't be litigating this.”

“The claim that the commonwealth withheld exculpatory evidence exists only in the minds of the Defender's Association,” he says. “One would think that perhaps the Pennsylvania Supreme Court would have picked this up (allegation) during their multiple reviews of this case.”

Wiseman will try again next month when he plans to argue for a new trial for Abdul-Salaam.

Robert Dunham, another lawyer with the Philadelphia Defender's Association, says his office has an obligation to perform its duty to defend the client as vigorously as possible. The law dictates that they do so in a very thorough manner, he adds.

“You have to raise every issue because the federal court doesn't permit you to raise any issue that wasn't raised in state courts,” explains Dunham, who represented Harold Wilson, exonerated in 2005 after spending nearly 17 years in prison. “And you only get one crack at it (in federal court).”

Anderson's blood is on the steering wheel - a fact Wiseman says was withheld from the defense during Abdul-Salaam's original trial. The medical examiner did not initially test all of the blood on the steering wheel, Freed explains, because he did not want to disturb what he thought was a fingerprint.

“It's not exonerating evidence,” Wiseman says, “but it certainly does favor (Abdul-Salaam) and it's evidence that wasn't provided to the jury.”

Still, Keating and Freed are dumbfounded by the motion.

“We're having this pitched battle in court... when it doesn't matter,” Freed says. “Even if it is someone else's blood, it doesn't absolve (Abdul-Salaam) of the crime.”

While the DA notes the presence of four eyewitnesses against Abdul-Salaam, Wiseman says he would argue that eyewitnesses are “the least reliable evidence.” Abdul-Salaam's picture was plastered all over the evening newscasts immediately following the shooting, he points out.

“I realize that this is the ultimate penalty and we've got to be as sure as we can be. But there's got to be some level of reasonableness,” the DA says. “DNA is not going to absolve anybody in these (Cumberland County) cases. There has to be a level of fairness for both sides.”

Even in its flawed state, the death penalty can be an effective bargaining chip in murder cases.

“We've resolved several cases in Cumberland County... that started out as capital cases,” Freed explains. “It can help with the resolution of cases. And I think it does have a deterrence effect.”

While stressing he can only speak from what he has seen, Freed says he believes the specter of the death penalty “helps keep guns or deadly weapons out of peoples' hands in certain circumstances.”

Still, he adds: “I'm not so sure you can call a sanction effective if it takes so many years to be effected.”

Cumberland County Public Defender Taylor Andrews used to be a death penalty advocate. He remembers campaigning for office years ago and chiding his opponent for being soft of the death penalty.

Representing killers like Spotz and Markman led Andrews to change his position. He recalls the words of former U.S. Supreme Court Justice Harry Blackmun, who famously announced a similar reversal in his 1994 dissent from the Court's refusal to consider the relatively routine death penalty case of Callins v. Collins:

“From this day forward, I no longer shall tinker with the machinery of death... It seems that the decision whether a human being should live or die is so inherently subjective - rife with all of life's understandings, experiences, prejudices, and passion - that it inevitably defies the rationality and consistency required by the Constitution.”

Andrews had a similar epiphany.

“I've been involved in as many capital cases as probably anybody in this county,” he says. “And they are wracked with emotion.”

Although Spotz represented himself during his trial, Andrews took over the death penalty phase and got a look at the his wretched upbringing.

“From the day he was born, his mother didn't want to bring him home from the hospital,” he says.

In 2003, the state Supreme Court's Committee on Racial and Gender Bias in the Justice System released a 550-page report that recommended Gov. Ed Rendell and the Legislature order a moratorium until courts can ensure the death penalty is administered fairly. The report addressed many issues, including gender bias in jury selection; a lack of racial and ethnic diversity in jury pools; and the high percentage (roughly 60-40) of blacks on death row.

Rendell, a former Philadelphia district attorney, supports the death penalty. He said before taking office that he would review death-penalty cases that are new or have new evidence, but has seen “no evidence” that the system is flawed.