The debate over cruel and unusual 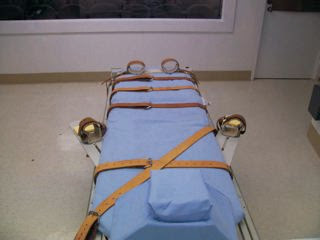 The debate over cruel and unusual

OCALA - Department of Corrections officials continued to testify in an Ocala courtroom Thursday about their role in Florida executions.

They talked about practice executions, mixing expired chemicals and the types of scenarios addressed during lethal injection training. Attorneys asked detailed questions about the prison's execution policies, all in hopes of getting a clearer understanding on whether lethal injection procedures in Florida constitute cruel and unusual punishment in light of the botched Angel Diaz execution in December.

Marion County Circuit Judge Carven Angel is expected to rule on executions in Florida sometime next week. His ruling will be sent to the Florida Supreme Court, which will review all court transcripts involving lethal injection, and then make its own ruling. The lethal injection policy is being litigated through Ocala death row inmate Ian Lightbourne.

In December, it took Diaz 34 minutes to die after an atypical second dose of chemicals. Then-Gov. Jeb Bush suspended all Florida executions until a full review of execution policies was done.

The difficult execution prompted officials to look at the lethal injection procedures. It also caused the Capital Collateral Regional Office - known as CCR, which represents dozens of death row inmates - to file petitions on behalf of all its clients claiming the practice was cruel and unusual. The same day, Dec. 14, the Supreme Court chose the Lightbourne case to examine the issue.

Last month, Angel ordered DOC to rewrite their execution protocol to include more detailed information about execution team members involved in administering the lethal injection. The department has updated its manual, but CCR argues the changes aren't enough to prevent another Diaz-like incident.

On Thursday, Warden David Harris testified about practice executions and how the execution team was confronted with various scenarios during training, such as handling a blocked line.

"We've actually trained twice with the actual chemical itself . . . so we would see what the resistance of the chemicals was," Harris said, adding the chemicals were expired. "We've practiced if we have a block in the actual IV line."

Lightbourne's CCR lawyer, Suzanne Keffer, in her questioning tried to discredit witnesses by asking whether they actually understood chemicals just as anesthesiologists would. Most witnesses were officers employed by DOC, and not medical personnel.

Last month, Gov. Charlie Crist signed a death warrant for Mark Schwab, 38, who was sentenced to death in 1992 for the kidnapping, rape and murder of an 11-year-old boy. It was the first death warrant issued in Florida since the Diaz execution.

Lightbourne, 47, was sentenced to death in 1981 for the murder of Marion County horse breeder Nancy O'Farrell, the daughter of a prominent horse-farming family.

Schwab is scheduled to die in November. The state Supreme Court will hear arguments in the Schwab and Lightbourne cases in October.

Mabel Perez may be reached at mabel.perez@starbanner.com or