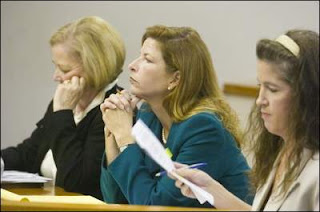 MIAMI - A judge on Friday rejected a request from a Death Row inmate's attorneys to force testimony and get notes from four journalists who covered a botched execution that cast doubt on the state's lethal injection methods.

Circuit Judge Carven Angel ruled after a hearing in Ocala that attorneys for Death Row inmate Ian Deco Lightbourne must first seek to get information about the Dec. 13 execution of Angel Diaz from some of the 19 other people who attended.

Lightbourne's attorneys have challenged the state's use of lethal injection as unconstitutional cruel and unusual punishment, a claim that has unsuccessfully been made numerous times before. They wanted to get details from reporters who saw Diaz's execution.

But Florida law gives journalists a "qualified privilege'' protecting their work from subpoenas, which requires lawyers to exhaust all other sources before trying to obtain information from news reporters, including one for The Gainesville Sun.

"The judge followed the law,'' said Alison Steele, attorney for the St. Petersburg Times. "Out of this great number of people, I'm sure the defendant's lawyers will find someone who can talk.''

Attorneys for Lightbourne had sought to subpoena Ron Word, the AP's correspondent in Jacksonville who has covered about 50 executions. Other subpoenas were issued for Chris Tisch of the Times; Phil Long of The Miami Herald; and Nathan Crabbe of The Gainesville Sun.

It remains possible that Lightbourne's lawyers could subpoena the reporters again if they cannot get the necessary testimony from others about the Diaz execution.

Diaz took 34 minutes to die - about twice as long as normal - leading to an investigation and a temporary suspension of executions in Florida. State officials said this week that executions are likely to resume at the end of this month.

Lightbourne, 47, was sentenced to death for the 1981 murder of Nancy O'Farrell after breaking into her Marion County home and stealing some of her belongings. Lightbourne has twice been scheduled for execution but won stays to consider his appeals, including an appeal currently pending before the Florida Supreme Court.
Posted by sisselnor at 06:40